At 11 The Boulevard in Crawley the “Platform_” building is a modern condominium of flats which opened in 2016.
Mia lives together with her parents Sonya and Allan on the second floor in the West Wing in a nice two-bedroom apartment overlooking the shops on the opposite side of the Boulevard.
Mia, 6 years old, was drawing and colouring on her new Ipad when something in the corner of the room attracted her attention. First, it seemed like something small caught fire and a thin cloud of smoke was raising from near the ornamental plant in the corner of her room. As she was watching the cloud became brighter and Mia started to think she should alert her mother when suddenly the air popped slightly and to her amazement a desk with an old computer materialised in the corner of her room !…and that was not all, a man was concentrating on the computer screen , typing now and then on his keyboard and apparently unaware of Mia’s presence.
Mia could hear the loud clicks on the keyboard when the man stopped typing, looked up from the screen and with mild surprise fixed his eyes on Mia.
– Hello, said the man, I’m John…who are you?
– My name is Mia and I live here with my Mum and Dad and this is my room…said Mia in one go…
The man seemed to Mia both surprised and humoured by the whole situation, he smiled at her and asked again:
– Who brought you here today? …must be one of my colleagues, he thought, some did bring kids to work just to show them around although it did not happen very often.
Mia did not understand how anyone could have “brought her” to her own room so she addressed John with superiority:
– This is My room. Who brought You here?
– I work here, said John. I’m an Engineer and I have been working at this desk for many years, even after 1989 when this desk was moved, together with our company, from Great Dover Street in London to Crawley.
Mia thought about it.
– What’s a company?
John thought about it for a bit, how to explain “a company of engineers” to little Mia?
– Well, it’s a place where many people work together to design things …they draw them first then they get made …we here design big furnaces in which coal gets burned to make hot water and steam, the steam then turns big wheels called turbines and all this turning makes electricity so that your Ipad can be charged when it’s running low on power.
John seemed very pleased with his explanations but to his dismay he noticed Mia frowning towards the end.
– OK, said Mia, I’ll just tell Mum…and with a quick turn she opened the door and ran along the corridor to the living room where Sonya was working today from home.
Sonya looked up Mia and extended her arms to Mia.
– How are you little bear?
– Mum, Mum, there’s a man in my room with a big desk and a computer…he makes electricity!
Sonya laughed with incredulity:
– I see…is he still there?
– Yes, said Mia, please Mum, come, come…
– OK, let’s see him…said Sonya lifting herself from her comfortable study chair and grabbing Mia’s little hand they both started walking towards Mia’s bedroom.
Sonya opened the door.
– There, in the corner, said Mia, pointing to the ornamental pant.
– That’s just the pot with a plant ?! Sonya pretended to be disappointed whilst smiling at Mia.
– But it’s true…said Mia, now a little upset, he Was here, he said things like “company” and “furnace” and “coal”….

Mia was right, she did see something. The quantum universe making up space and time has strange properties that scientists have just started to unravel. Mia has witnessed a quantum superposition maybe enhanced by the inherent quantum entanglement of past, present and future.
An engineer from Babcock Woodall Duckham Ltd working on his designs sometime between 1970 and 1980 appeared in her room in 2019 and for a short while the two realities became one.

The building now called “Platform_” was built in 1964 and its name at the time was Woodall Duckham House. 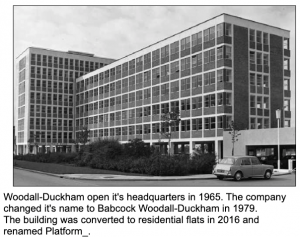 Woodall Duckham Construction Ltd., the engineering company covering a large range of engineering projects from chemical to oil, energy and construction moved from London to Crawley in their new house in 1965. 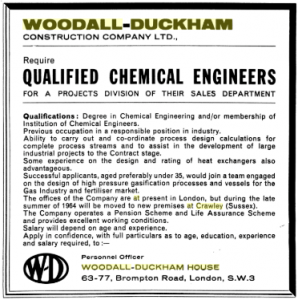 Whether Mia will choose to become an engineer and work for a “company” it’s unlikely that she will become involved with designs for “coal furnaces” which seem to have been beaten at the moment by green alternatives such as wind turbines, “biomass furnaces” and nuclear power. 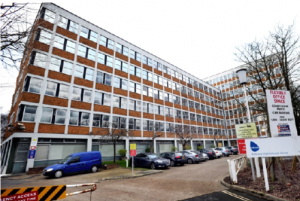 “W-D”, as we were afrfectionately known, actually moved from Brompton Road, Knightsbridge, (next door to Harrods), to Crawley in 1965. See: https://www.gracesguide.co.uk/Woodall-Duckham_Construction_Co for backgroiund dates & info.
I worked for W-D from 1960 until 1965 thern moved to the National Coal Board, where my knowledge of coking plants, etc, came in useful.

Thanks Graham, that’s a useful link

What a lovely article! Adrian Bridget, I am also an ex B&W employee. I was hired straight from university as a Graduate Trainee and worked at B&W’s London offices at 165 Great Dover Street. I left B&W in 1981 and emigrated to Canada but during one of my visits in the eighties I visited the Crawley office to meet my old colleagues. I had no idea that the Crawley office was vacated by Babcock and converted into apartments. This was exactly what happened to their offices at 165 Great Dover Street, London as well.