At Crawley Museum we love crows.

Because the word ‘Crawley’ comes from the Saxon word for ‘Crows Wood’.

When we’re open people love to colour in Crows in our Learning Space.

While we’re closed for a while, why not colour one in at home?

The Old Toll House in Northgate was near the entrance to what is now Ifield Drive, at the junction with the High Street. As well as a photograph of it, we’ve recently been donated a watercolor painting, presumably based on the photo. There is no artist’s name on the painting.

As part of our Crawley’s Collections Revealed project (funded by Arts Council England), we’re meant to be running face to face sessions with people, looking at objects and writing labels.

Obviously we can’t do the face to face bit right now, but we can still show you objects and ask you to tell us what you’d put on a label.

It can be something factual, something the object makes you think of or remember, or even a drawing or poem. It’s up to you.

This week’s object is a milk bottle. Apparently R.G. Law was known as ‘The Midnight Milkman’ because of his erratic delivery times!

Let us know in the comments what you’d put on a label for this object? 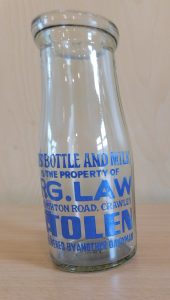 (The writing on the bottle reads: “This bottle and milk is the property of R.G. Law, 16 Brighton Road, Crawley. Stolen if delivered by another dairyman.”)

This morning the trustees have made the difficult decision, that in line with the government advice, we are closing the Crawley Museum and Ifield Watermill until further notice.

In the meantime we will be posting on our social media and website.

Please all stay safe and we hope to see you all when we are able to reopen.

This year our WordFest exhibition focuses on writings about Crawley’s history. 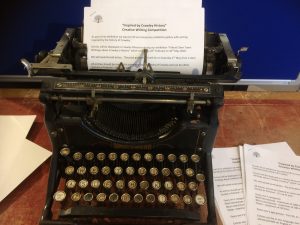 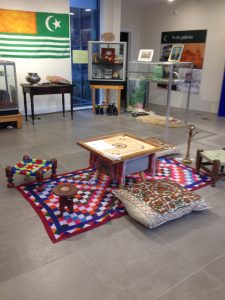 We are delighted to be hosting an exhibition by Parveen Khan and members of the Crawley Kashmiri community on the history, traditions and culture of Azad Kashmir.

The exhibition launch event will take place at the museum on Saturday 11th January 2020 from 12 noon to 2pm.
Come see traditional artefacts, paintings, photos and clothing while enjoying the taste of fresh Kashmiri food and tea.

A look at the life and influence of this often-neglected social investigator, who gave a voice to the poor in the 1850s and 1860s.

This talk ties in with a project led by the University of Leeds aiming to promote awareness of the historical participation of women in engineering.

A look at the evolution of the insect world, with particular focus on Dave’s special interest, moths.

Most people know of the Great Exhibition in Hyde Park in 1851. Less well known is the story of the Crystal Palace after its move to Sydenham Hill and its role as a true ‘Palace of the People’.   Philip tells this remarkable story.

Tuesday 26 May 7.30pm ‘The Iron Industry in the Crawley Area’ by Jeremy Hodgkinson

Author of the seminal ‘The Wealden Iron Industry’, Jeremy relates the story of iron working in the local area.

Charles leads us on a journey into the development of the West Green area, from Victorian times to the New Town after 1947.

A former Director of Crawley Open House, Peter has worked with disadvantaged and vulnerable people across London, Kent and Sussex. This talk highlights the challenges this work has provided.

No meeting in August. Autumn/Winter 2020 programme to be announced. All talks are subject to change. Please call Crawley Museum on 01293 539088 if you wish to check.

On October 30th Crawley Museum will be opening their latest exhibition, and for it to be a success they need everybody’s help.

To make it work the museum is asking everybody who can to come along and share their memories of the toys they loved as children. If you still have that old teddy, a doll, or train that made you happy when you were small, Crawley Museum would dearly love to be able to borrow it for the duration of the exhibition.

The exhibition itself includes display boards, video, and toys which you can touch and play with. But what it’s really all about is your own memories of dolls, bears, Meccano, Hornby and Airfix.

It doesn’t matter if you don’t have the toys which you remember, they’d still love to hear your stories of the way you used to play, or indeed the way you still play today.

If you have an abiding memory of a much loved toy, or you have a toy which you are prepared to lend to Crawley Museum for other people to see and enjoy, then please get in touch. If you are in a position to make a loan of your cherished toy, don’t worry! The toys which you provide won’t be among those which will be used in the toy box and played with by other visitors, instead your loans will be carefully put in a cabinet where they can be seen, but not touched.

For more details on how you can get involved with the Toys exhibition, what it involves, times and dates simply ask at the museum reception, call 01293 539088, or send an email to office@crawleymuseums.org

After the business meeting, there will be refreshments followed by a talk by Holly Parsons, Curator. 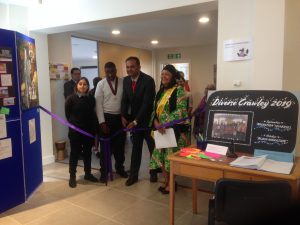 Our new temporary exhibition on migration is now up. Created by Crawley Campaign against Racism and Diverse Crawley, it runs until the 27th October 2019. Free entry, but donations always welcomed! Open Wednesday to Saturday from 10.30 to 4pm and Sundays from 2pm to 4.30