In the early nineteen fifties few Crawley residents had their own transport beyond a bicycle; the factories on Manor Royal all had large cycle sheds and the cycle tracks beside the by-pass on the A23 or from Northgate to Manor Royal could get quite crowded at the beginning and end of each working day. Trips to the seaside were therefore reliant on public transport.
Littlehampton was the usual destination for our one-day summer outings. It was further away than Brighton but had a better beach for young children and in those days could be reached from Crawley Station without the need to change trains. The whole family couldn’t then afford to eat out so my mother and grandmother would prepare sandwiches for the day, fill at least two large thermos flasks and make up a bottle of orange squash. These were packed into shopping bags together with our buckets and spades, and plastic macs in case of rain. The family would set off on the half hour walk into town followed by the one-hour train journey and the twenty minute-walk from Littlehampton station to the East Beach. 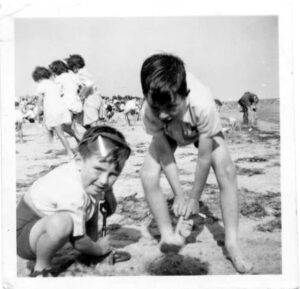 As soon as we arrived, my brother Ian and I would throw off our clothes, change into our itchy woollen knitted swimming trunks and rush into the sea, where we would remain for an hour or more, sometimes kneeling down so that only our heads were visible in order to alarm our granny. When we’d had enough of playing in the sea, we would move on to the beach to make sandcastles with elaborate moats which the incoming tide could fill, shortly before demolishing our structures. After an hour or two playing on the beach we would return to the adults to eat our sandwiches, unsuccessfully trying to prevent them from becoming contaminated with sand that got everywhere. As a treat we might be given a piece of Fry’s chocolate cream or ‘Five Boys’ chocolate bars and a glass of orange squash. 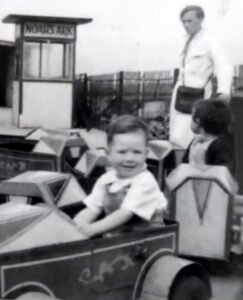 Little children were consigned to the roundabouts

Sunburn was an occupational hazard of any fine summer’s day with sunblock being quite unknown. The trouble was that we would usually only discover that we had stayed out in the sun for too long after the event, when the skin on our shoulders or the backs of our legs went bright red began to peel, resulting in bedtime tears and the liberal application of calamine lotion. After a morning spent on the beach, we might all repair to the nearby Butlin’s amusement park to spend our pennies on the slot machines. The large roller-coaster on top of the building could be heard above us but was considered too dangerous for little children, who were consigned to the roundabouts. If we were lucky, we might get taken on to the dodgems by our parents.

In the early 1950s Northgate had an active ‘Tenants Association,’ which both campaigned for better facilities for the New Town and organised communal coach trips to the seaside, especially on summer bank holidays. These reached the peak of their popularity in the summer of 1954 when we counted fourteen motor coaches each with more than forty seats lined up outside the Community Centre in Barnfield Road. Once again, the usual destination was Littlehampton although we did once venture further afield to Bognor Regis. As usual, there would be several hours spent on the beach or at the fun fair before returning to our coaches at five o’clock sharp. On the way home there would be prior arrangements made to stop at a pub mid-way where the children would be consigned to the beer-garden each with a bottle of lemonade and a packet of Smith’s crisps, whilst the adults (including the drivers) would repair to the bars. It was probably just as well that coaches were then restricted to 40 mph. On the way home there would be singing in the coach and one of the children would be sent round with a hat for a collection for the driver.

In August 1953 my parents decided that they could at last afford to take us on a one-week package holiday at the Warner ‘Coronation’ Holiday Camp in Hayling Island (now known as the Lakeside Holiday Centre). This had been opened in 1937 to coincide with the Coronation of George VI but had closed for the duration of the war. It consisted of brick chalets around various communal bars and restaurants and an artificial boating lake. Travelling to Hayling Island involved a longer train ride as far as Havant and then a short journey hauled by a tiny steam locomotive over the rickety wooden causeway onto the island. 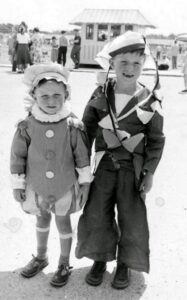 There were always plenty of things for young children to do at holiday camps including organised sports and games, donkey rides, a playground and a paddling pool. The camp held weekly bathing beauty competitions by the pool and ‘knobbly knees’ competitions for the men. The only trouble was that there would inevitably be a children’s fancy dress competition and my brother, and I would be entered by my mother, whether we liked it or not!

In those days it was the usual practice for parents to leave their children sleeping in the chalets whilst they went to the dance hall or one of the bars for the evening’s entertainment. The camp provided wardens to walk around listening out for any children who were crying. I was awakened once by an unusual noise outside our chalet and Ian told me it must be a ghost. Although I was then five years old and considered myself to be quite grown up, I had to endure the humiliation of an announcement over the Tannoy in the dance hall that a ‘baby was crying in chalet 16!’

When my parents acquired a motorcycle and side car in 1954, more frequent summer outings could be contemplated. These included daytrips to Littlehampton and Brighton and an annual one-week at a holiday camp or caravan park. Some of these were on the Isle of Wight, involving the car ferry across the Solent. However, with my Granny in the front seat of the sidecar and my brother and I sharing the back seat, the motorcycle almost inevitably overheated whilst attempting to climb any steep hill and we had to break our journey to give it time to cool down. I remember several such stops at Bury Hill. In 1956 we even took a family holiday (this time without my granny) staying with relations in Southport Lancashire. We almost made it there and back, but the motorcycle finally gave up the ghost in Carshalton on the way home and we had to be rescued by the A.A. 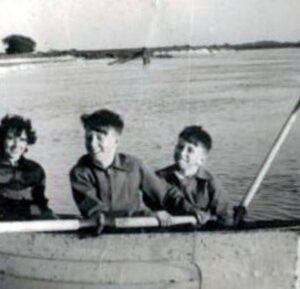 The dinghy belonging to ’The Phoenix,’ Littlehampton 1957.

The following summer our family stayed for a week on a large yacht moored in Littlehampton Harbour, on which my father had been working in his spare time. We had grown out of building sandcastles, by this time but we were at least permitted to use the rowing dinghy attached to the boat. The yacht on which we stayed was ‘The Phoenix’ – a ferro-cement craft built by Ted Rogers and his friends. He was a remarkable and admirable Northgate bricklayer, who was badly disfigured during the war and spent the rest of his life as a peace campaigner. His yacht would later go on to have many adventures crossing the Atlantic Ocean and sailing in the Caribbean before hitting a reef during a storm in the Bahamas and sinking. (https://www.theguardian.com/theguardian/2008/apr/11/2) 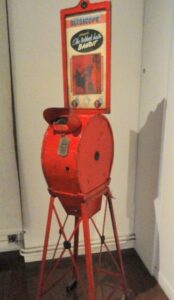 As my brother and I grew older, the town of Brighton with its two piers, the Volks electric railway and innumerable penny arcades, began to hold more attraction than the beach at Littlehampton. The Palace Pier had many opportunities for children to spend their money. In addition to the penny in the stot machines there were rows of elderly Mutoscopes (some dating from before the First World War). These contained a large reel of photographs which were ‘flicked,‘ to create a moving image (which explains why we referred to the cinema as ‘the flicks’). Customers inserted a penny then peered into the metal box, turning a handle to operate. Some of the shows were comedies but others were a little risqué – at least by the standards of the time and were intended for adults. Children had to stand on the cross bars of the frame in order to be tall enough to see in. On one occasion my two elderly maiden aunts had taken Ian and I on a daytrip by train to Brighton including a visit to the Palace Pier. They were quite shocked to discover that I had invested one of the pennies they had given to me on ‘What the butler saw’!

In 1959 our family acquired a car – a second-hand Ford Popular – which enabled journeys in more comfort. It also resulted in more ambitious family holidays to Devon and North Wales. By this time we had both progressed to Secondary School and moved on to other interests, although trips to the seaside remained an important feature of our teenage years.

Great stories David, I was a mate of Ians from school and after.

David. You were in my year at Thomas Bennett. Your memories echo mine. Train spotting, Littlehampton, Brighton, Hayling Island etc. I remember you being particularly generous in handing out your liquorice Imps to the rest of us. Do your ember spotting with Ken Williams, Laurence Purvis and “ Boz “. I still have your autograph somewhere. Do you remember Colin Edgar and his frequent painful visits to Mac’s study .
Where do you live now – drop me a line. Phil Millington
Email. pandjmilli@btinternet.com