My brother, sister and I were the third generation of my family to live at Crabbet Park.
We lived in a Sussex style cottage at Caxtons on the estate, where my father was Stallion Man for Lady Wentworth. 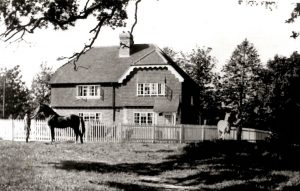 Our lives were ordered by the changing seasons and the care of the Arab stallions. In spring we would pick snowdrops which flowered in Caxtons House garden. In the woods and paddocks we would pick bunches of lent lilies, primroses, bluebells and cowslips, always taking bunches for our granny and great aunts.
In autumn we would pick blackberries, hazelnuts and chestnuts from the woods, always accompanied in the paddocks by curious mares and foals as to what we were doing, we had no fear of them or them of us.

I can remember one early morning, going to see the yearling colts in a meadow near our cottage, they looked to me so comfortably asleep on the ground, I could not resist climbing the fence and walking over to them and laying down amongst them with my arms around a colts neck. This very pleasant time was interrupted by the Stud Manager shouting at me, to come out of the field and I had brisk telling off about the dangers of frisky colts. My parents were duly warned that I was forbidden to enter the colts’ paddocks.

Another time when my parents were not at home my sister and I were called urgently by our Uncle Rodney that a gate had been left open in the paddocks and Indian Magic was on his way into the next paddock where Indian Gold was already becoming agitated and would fight, we must catch Indian Magic and lead him away and shut the offending gate.

I was aged nine years and my sister was six at the time, I had up to then, never put a head collar on a stallion on my own, luckily for us Indian Magic was a quiet and steady horse and knew me and my sister very well. He stopped when I called him and stood for me to pull his head down far enough to slip on the head collar and buckle it up. In the meantime the other stallion who was very excitable and fiery was racing up and down his side of the fence roaring challenges. My uncle waited away from the paddocks as he feared that the horses would take against him as he was a stranger to them both but he could still see us.
We led Indian Magic away to safety, shut the gate and left him to munch grass. I shook like a leaf afterwards when telling my mum and dad.

We went with my dad and mum to all the major Horse Shows, where our Crabbet Arabian horses won first prizes and the breed championships, very proud we were too of them and our dad`s hard work in preparing the horses for the shows and the appreciation of Lady Wentworth.

Find out more about Crabbet Park in Liz Archer’s articles

Thanks to Stella Berrisford for the use of the photographs.

How beautiful Thank you so much for sharing ❤️

Thank you so much for sharing with us I’m one of many who spent over a year 1978/9 studying at Crabbett Park living there caring for the horses and riding.
One of the Stallions was Imperial Gold and the other Fairfield’s Chancellor both beautiful of course.
When I bought a mare less than 5 years later I was amazed upon receiving her papers to find she was from the Fairfield Chancellor line directly descended from him. We won many prizes at shows including The South Of England Show. My time at Crabbett was the most magical fulfilling time I loved it dearly. Happy memories indeed. I have many photos to remember those times. I am in touch with many others who were also lucky enough to have studied and taught there.

Do you sell a book of Crabbet Park???? Am interested in the history of the property and of course the Arabian horses. Cheers

Yes, we sell ‘The Crabbet Arabian Stud: Its History and Influence’ by Rosemary Archer.

I had the honour of meeting Indian Magic in his twilight years at the very young age of 12 years. We were made to feel so very welcome by the stud manager when we dropped after our lesson at the riding school. This is a beautiful page, thank you so much for taking the time to share your memories

What an amazing story! We run the Crabbet Heritage website and would love to feature your story if you are agreeable? ( And any others you may have!)

I am happy for you to use my story of some of my memories from Crabbet Arabian Stud on the Crabbet Hetritage website.

How lovely and also very interesting.

As a young boy totally overwhelmed with the horses of Crabbet Park. I began a wonderful correspondence with Cecil Covey. He was always happy to answer my many questions regarding this famous stud farm. My dear friends here in California eventually purchased Silver Vanity in his later years. I’m still breeding today on a limited cycle. My life for the last 60 plus years have given me the greatest of pleasure. I enjoyed these wonderful horses since my first mare Pomona Ayah #2988 bred by the remount. More later if you wish. Thank you .
Respectfully Larry Perryman.

I have owned several near and pure Crabbett horses , they were special and all represented the phenotype of their ancestors . Love the bloodlines .