If you were writing a label for it what would you put on it? It doesn’t have to be serious!

Comments from our followers on social media included:

“Iron. Something my Mum used to spit on before she started ironing.”

“Iron, often put in handbags to ward of unwanted advances!”

“Flat iron – these were of no use to Crawley people until the new town was built as the law forbade using them unless you lived in a flat. By the time the new town brought flats to the area, electricity had become a big thing and people bemoaned never being able to use these irons.” 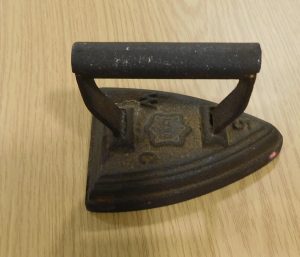 This is a Victorian iron which was heated on the open fire or range.
Made of heavy metal, it meant that ironing was laborious and hot work and the person using it would have had to protect their hands so they didn’t get burnt.