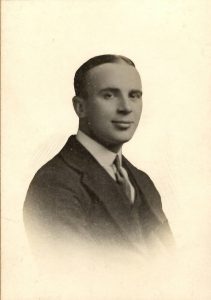 Charles Kenneth Mitchell was born 1st October 1889 to parents Charles James and Sarah Blanch Mitchell. He had one sister; Blanche Mary who was 4 years older. Charles senior worked as the Postmaster for Crawley while the family lived in locally at 24 High Street and later New Road.

Kenneth or Ken to his friends was a popular lad, a member of the local choir as well as playing football and cricket in Crawley and Three Bridges. In the 1911 census he is a 21-year-old man working as an estate agent while living at the family home, Roxham, Post Office Road, Crawley.

When war broke out there was a need for young men to sign up. The 11th Battalion Royal Sussex Regiment was formed on 7th August 1914 in Bexhill. The 11th along with the 12th and 13th regiments were know locally as Lowther’s Lambs because they had been raised by Claud Lowther MP. We do not know when Ken signed up, but it must have been soon after the battalion’s formation.

Shortly after joining, tragedy struck when Ken was admitted to Bexhill Hospital with Spotted Fever which developed into Meningitis and killed him on Friday 5th February 1915. He was 25 years old. During the time spent with the battalion in Cooden Camp, Bexhill he achieved the rank of Lance-Corporal. 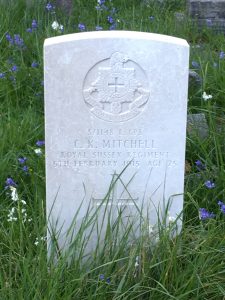 Ken’s body was transported by motor hearse to Crawley where he was buried in a military grave at St. John the Baptist Church the following Wednesday. His coffin was partially draped in a union flag, carried from the family home by uniformed service men, followed by floral tributes, the Crawley Boy Scouts, The Manchester Regiment which was based in Three Bridges and mourners. At the end of the service three volleys were fired over the grave and the Last Post played on the bugle. Sadly, Charles James was too ill to attend the funeral.

At a local fundraising event for the war effort shortly after Ken’s death, Mr Lehmann is reported to have said “Mr Mitchell had died for his country just as surely as if a bullet from the Germans had brought him down in the trenches. … and when the time came to erect a Roll of Honour for those in the district who had died for the country’s cause, the name Kenneth Mitchell would not be absent.” (Richardson, 2011, p. 75-76). 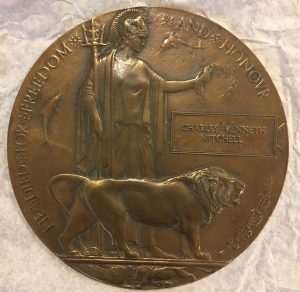 The 11th, 12th and 13th Battalions went on to be sacrificial lambs at the Boar’s Head raid to draw German attention away from the battle of the Somme further south. 30th June 1916 subsequently became known as The Day Sussex Died due to the amount of men that were wounded or killed at Boar’s Head and is where Lowther’s Lambs got their name.

Ken is one of two soldiers who died during the First World War to be buried at St. John the Baptist Church Crawley. Gunner Howard Clement Pace died on 5th July 1916 aged 22 and was buried in the plot next to Ken shortly after. Both are remembered on the plaques outside of Memorial Gardens, Crawley and on the war memorial outside the same church.