Brett Marvin and The Thunderbolts

(aka Terry Dactyl and The Dinosaurs)

Brett Marvin & The Thunderbolts had their beginnings at Thomas Bennett school in Crawley. Teacher Pete Gibson had set up a folk and blues club at the school, and one of his students was Graham Hine, who was already forging a bit of a reputation locally as a slide guitarist. Hine began to perform at Gibson’s club, and he was quickly joined by fellow student Keith Trussell (aka Keef Trouble) and by John Randall. The latter was given a washboard that Hine had made out of bamboo, while Trussell played what he called a Zobstick, a version of the monkey stick, a traditional, tambourine-like percussion instrument.

The band consisted of Graham Hine (electrified nine-string acoustic guitar, vocals), John Randall (washboard), Keith Trussell (Zobstick), Pete Gibson (trombone, vocals) and Jim Pitts (mandolin, piano, vocals). The year was 1968; Brett Marvin & The Thunderbolts were up and running.
The band’s earliest appearances were at Pete Gibson’s folk and blues club in Crawley. The band were invited to play at Ken Colyer’s Studio 51 club in central London. In the spring of 1969, Brett Marvin & The Thunderbolts were offered the Studio 51 residency.
In 1969 the band contributed tracks on I Asked For Water, She Gave Me Gasoline, a compendium of unsigned British blues acts. By the time the album was released, John Lewis had become the sixth member of ‘the Bretts’.

The band mixed their American Delta country blues sound with an eccentric English sound with a performance art mentality. The band would employ offbeat instrumentation that included oil drums and Zobstick, an ironing board and kitchen sink. Keith Trussell would pelt audiences with a dustbin full of oranges, or maybe fill the entire stage with brown paper bags, or turn up onstage with a three-piece suite, standard lamp and vacuum cleaner. Meanwhile, the band would play in matching pink string vests, mackintoshes and wellington boots with jockstraps over their jeans.

January 1970 the Bretts – still semi-pro at this point – went into Orange Studios in London to cut their debut album, naturally entitled Brett Marvin & The Thunderbolts.

The Bretts were acquiring a reputation within the industry, and John Peel was an early fan, and was sufficiently impressed to invite the band to record a session for him, the first of half-a-dozen Radio One sessions in the space of around ten months. During this period, they performed alongside blues legend Son House, and then as support to Eric Clapton on an inaugural UK tour by Derek & The Dominos that lasted from late September to mid-October 1970.

In May 1971, Twelve Inches Of Brett Marvin & The Thunderbolts was released as the band’s second album, with tracks that confirmed their blues style.

However, at the same time, John Lewis had written an upbeat, summery song called ‘Sea-Side Shuffle’ about a day trip to Brighton. This didn’t fit with the Bretts’ trad-blues style, but it was issued as a single in July 1971, credited to Terry Dactyl & The Dinosaurs. At the time it attracted little attention. However, in the spring of 1972, Jonathan King heard ‘Sea Side Shuffle’ and reissued it and by the second week of August, ‘Sea Side Shuffle’ was at number two in the charts, and Terry Dactyl and The Dinosaurs were on Top Of The Pops! You can listen to it here

The success of the single transformed John Lewis into pop star Jona Lewie and he left the band. Graham Hine reformed the Bretts, and they spent the rest of the seventies touring the country. 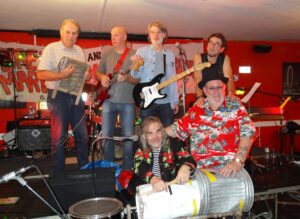 Went to Crawley College in the same class as Malcomb Graham’s brother who i believe has joined the band. Remember two or three absolutely mad Christmas GIGs at the college with the purple gang i think.
Never forgotten the boot with the beer caps used during the show

Great band. Many happy memories of Studio 51 on Sunday afternoon with other artists such as Dave Evans, Jo Ann Kelly and Lol Coxhill. I had the good fortune to see them supporting Mungo Jerry in 1970 for a BBC recording at the Paris Studio. Innocent and happy days. No booze on sale but crinkle cornered sandwiches and Coca Cola.