Music has always been an important part of life in Crawley. In this exhibition we explore some of the music in Crawley that is within living memory.

This would not have been possible without the generosity of the people who have shared their memories and photographs and who have loaned us objects.

If you would like to share your memories of music in Crawley with us then please get in touch!

The exhibition is free but as an independent museum we’d really love it if you’re able to make a donation – thanks! 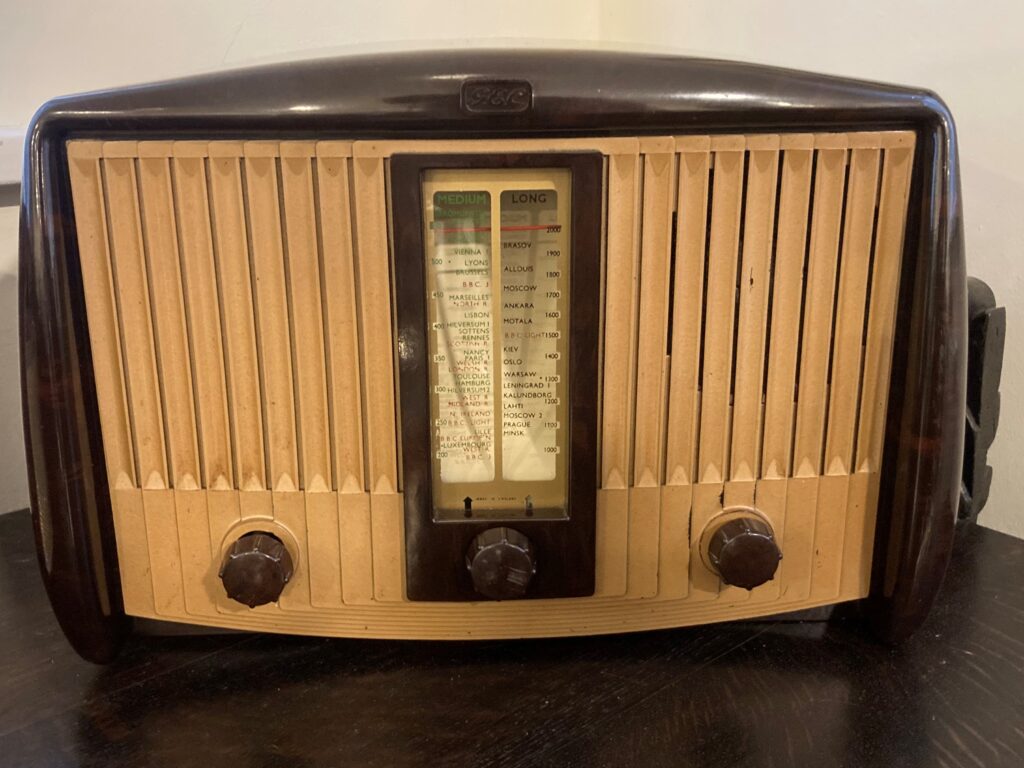 G.E.C Bakelite valve Radio, model number BC 5243. Made in 1950. In museum's education and handling collection. 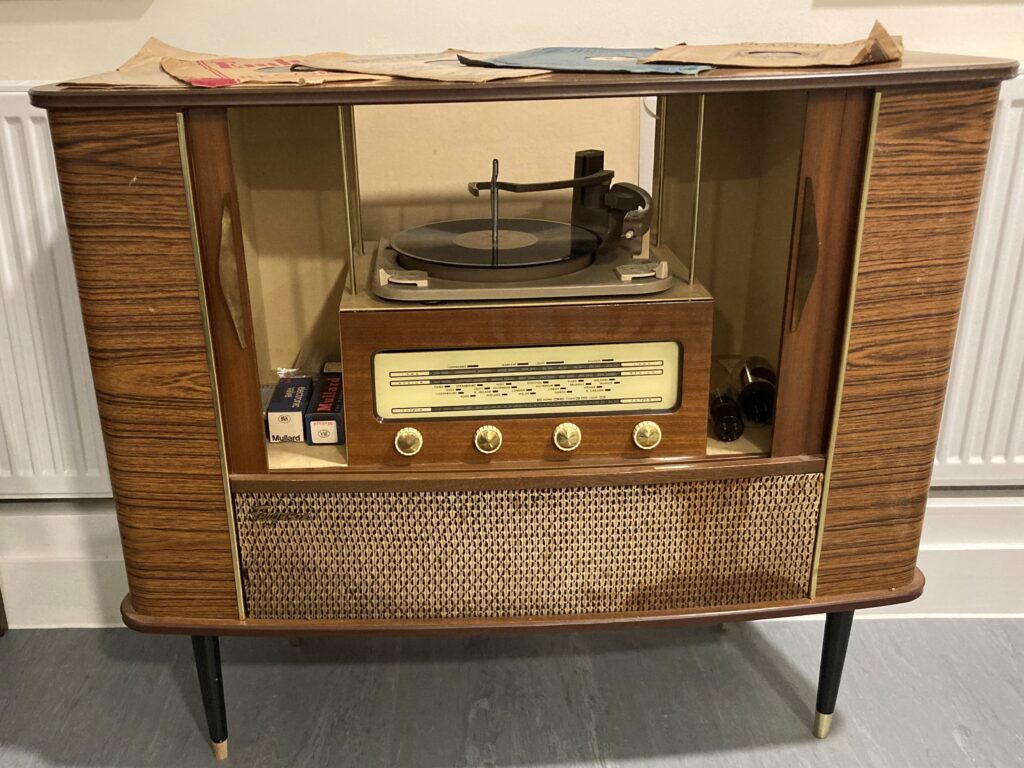 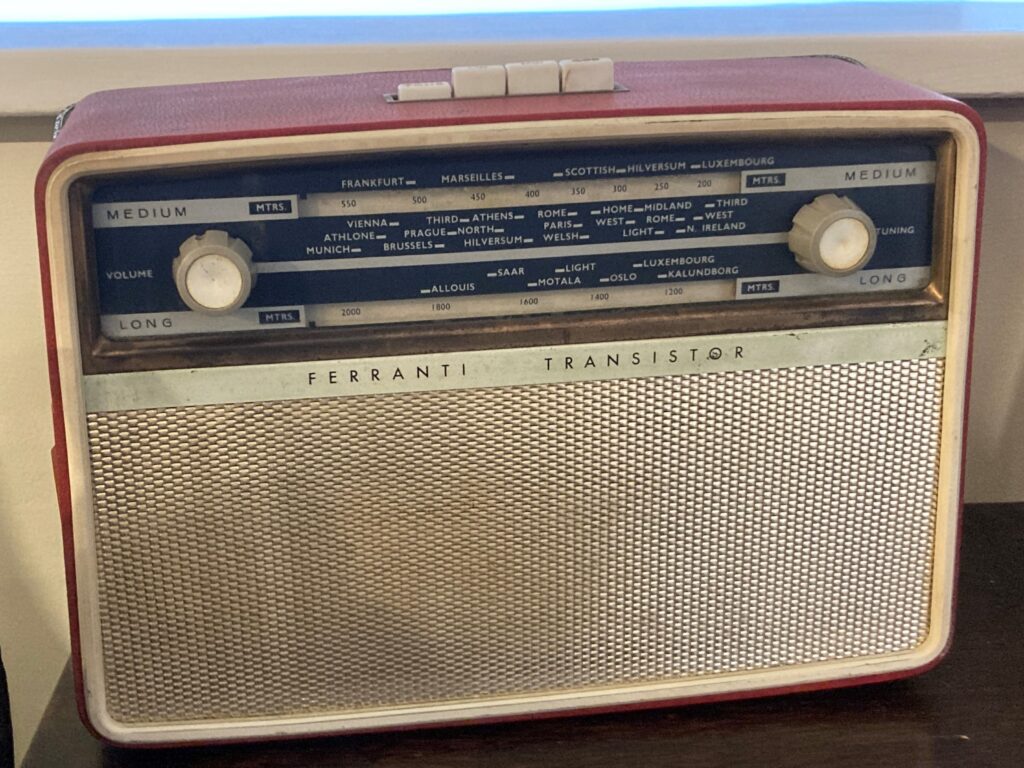 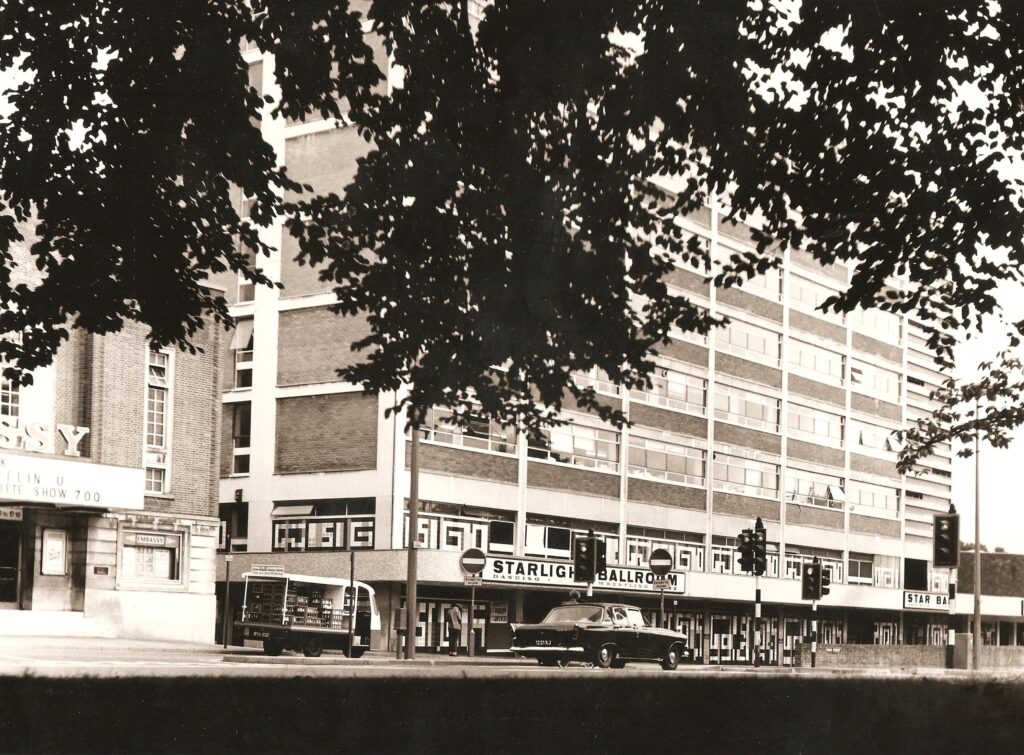 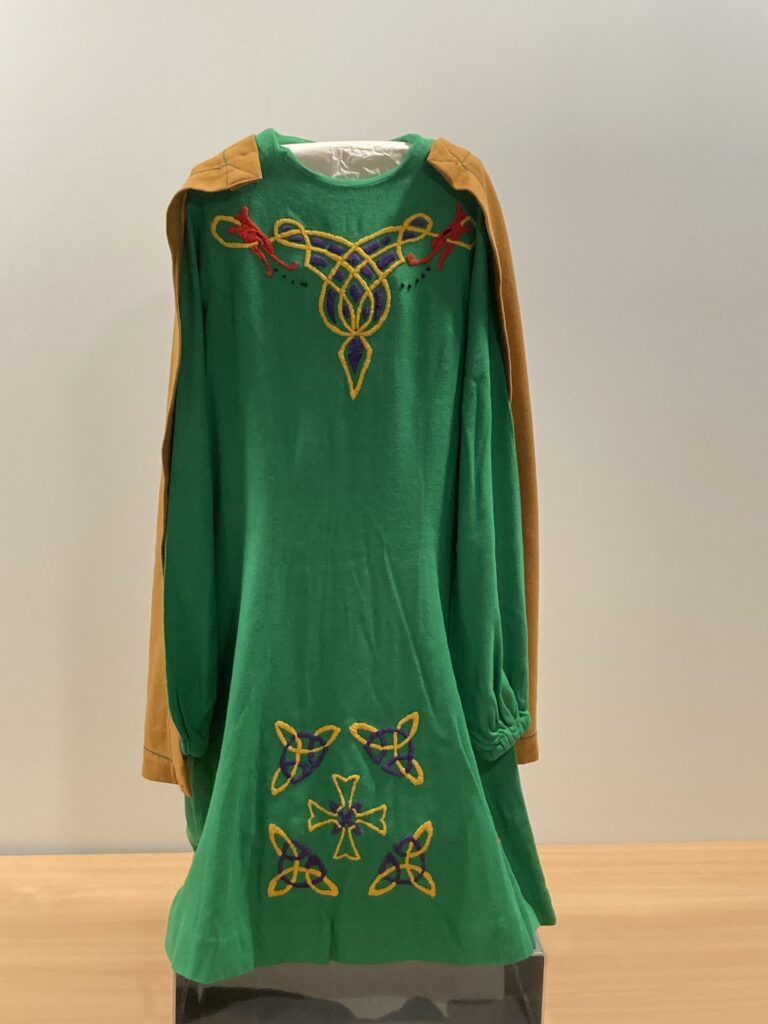 This embroidered dress and shawl was donated to the museum by Nora Green, the leader of the Irish Dancing Club. She wore it for Irish Dancing shows. 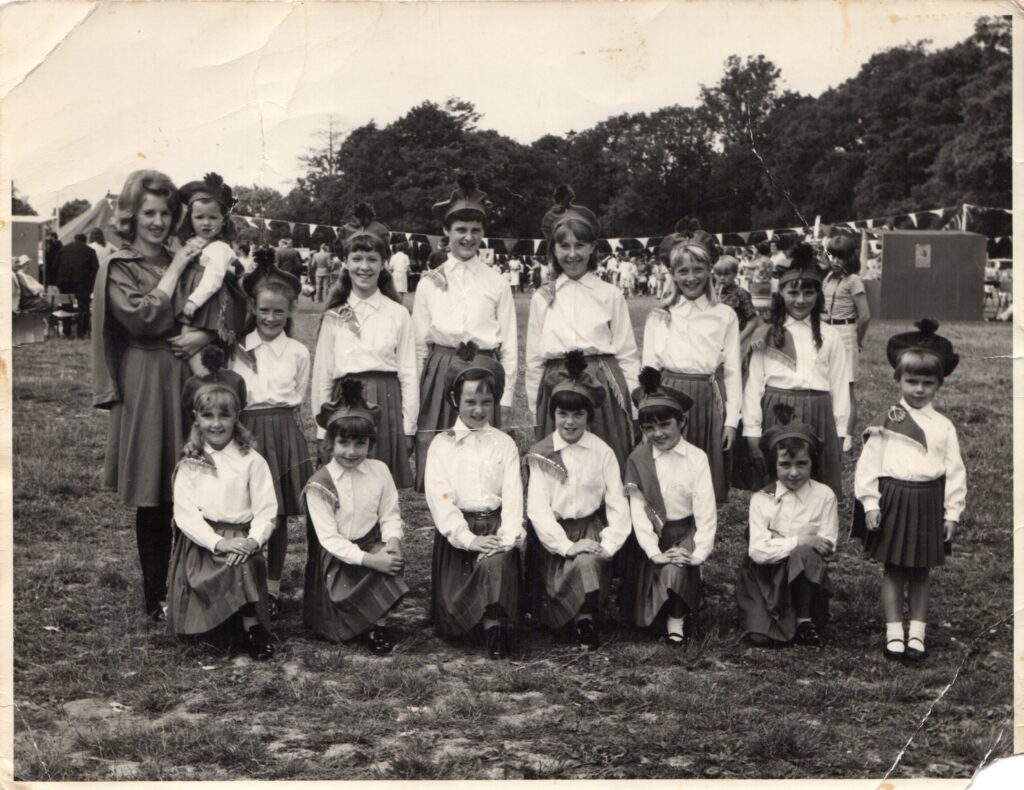 Nora Green and members of the Irish Dancing Club at a local event. Year and location unknown. The photograph was donated to the museum by Nora Green. 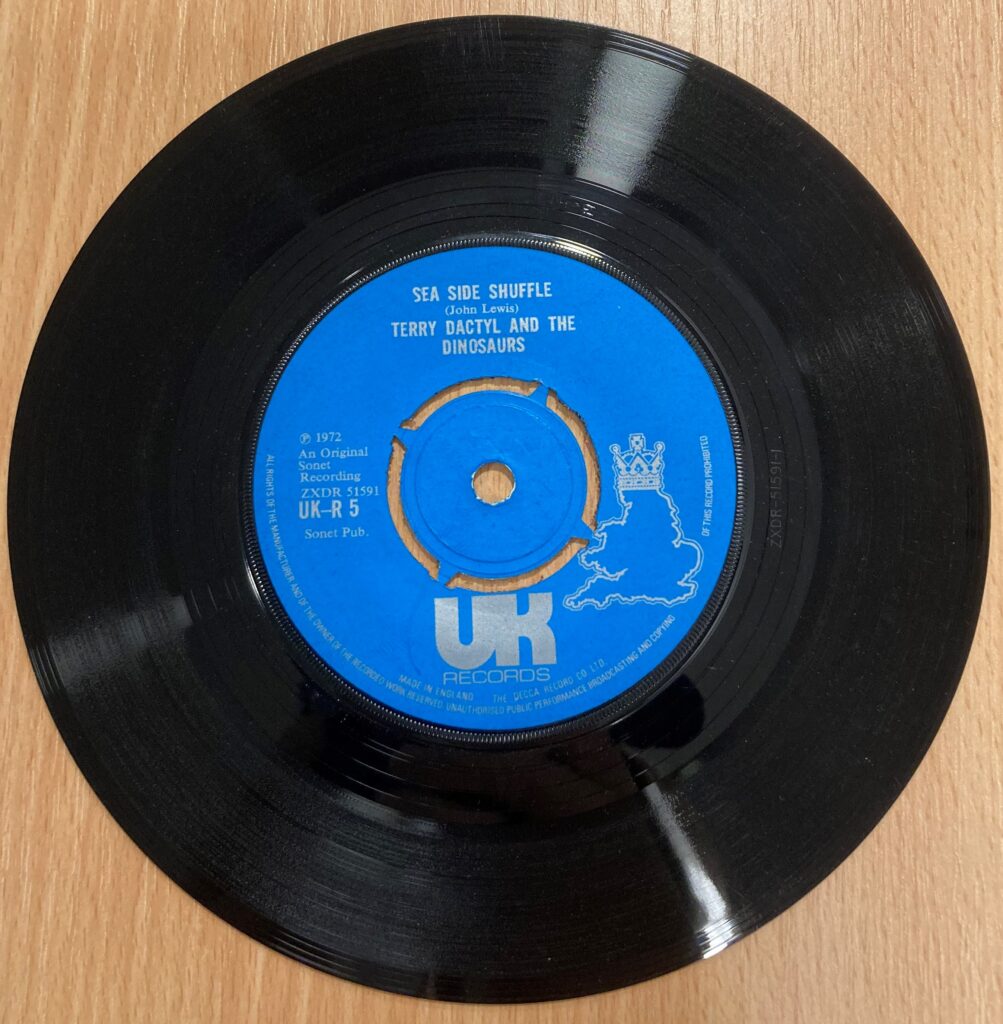 'Seaside Shuffle' by Terry Dactyl and the Dinosaurs (aka Brett Marvin and the Thunderbolts). Originally released in 1971. Re-released in 1972. On loan. 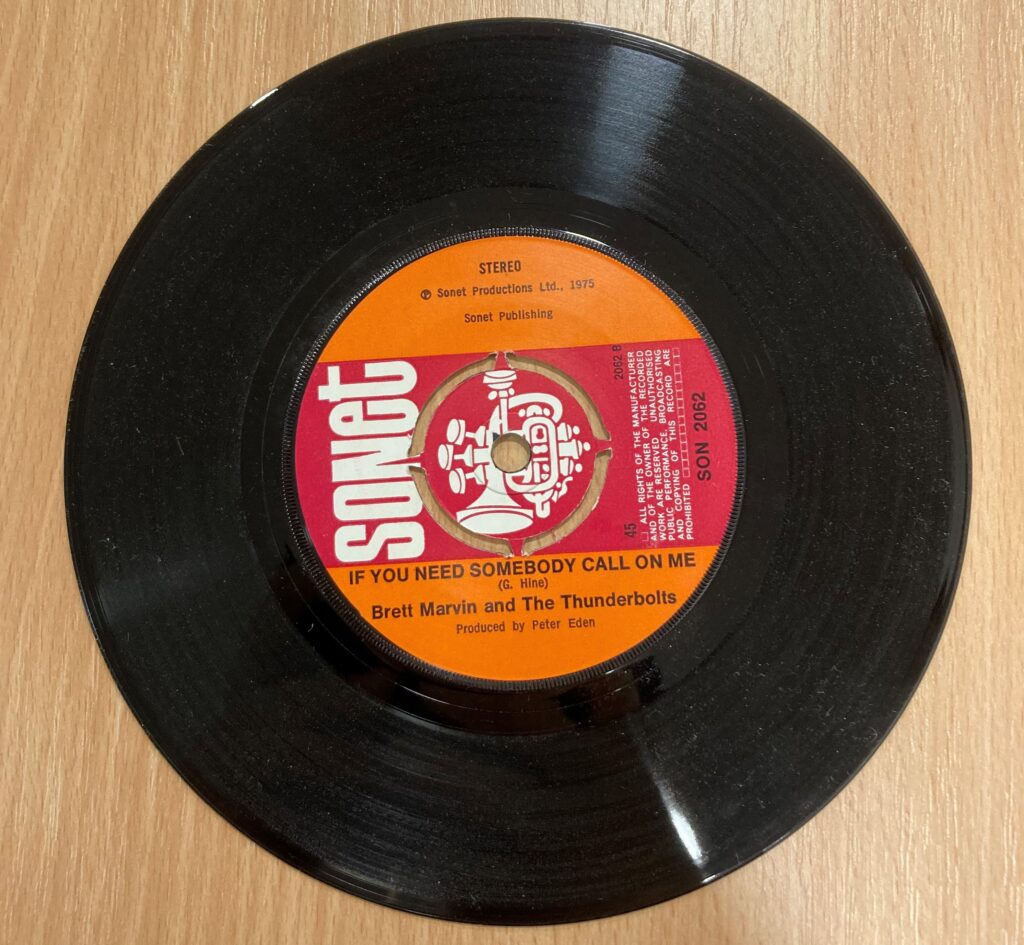 'If You Need Somebody Call on Me' by Brett Marvin and the Thunderbolts, 1975. On loan from Jeff Pitcher. 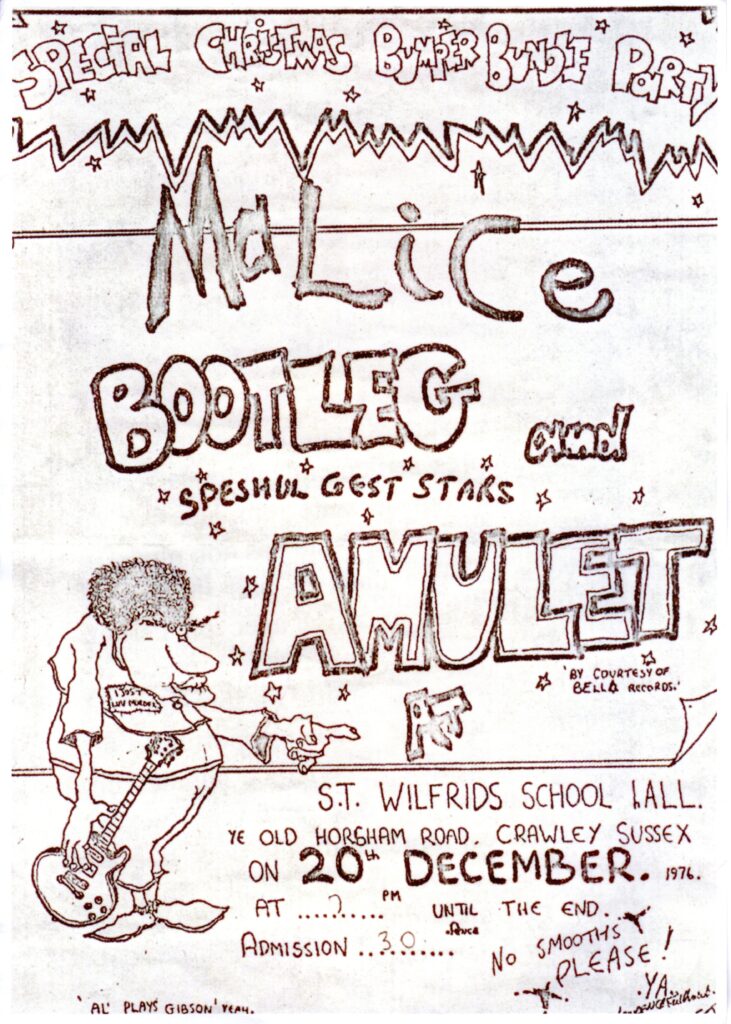 1976 Poster. The band Malice included Robert Smith, who went on to be in The Cure. This poster was donated to the museum by Martin Creasey, who played with Malice for this gig. 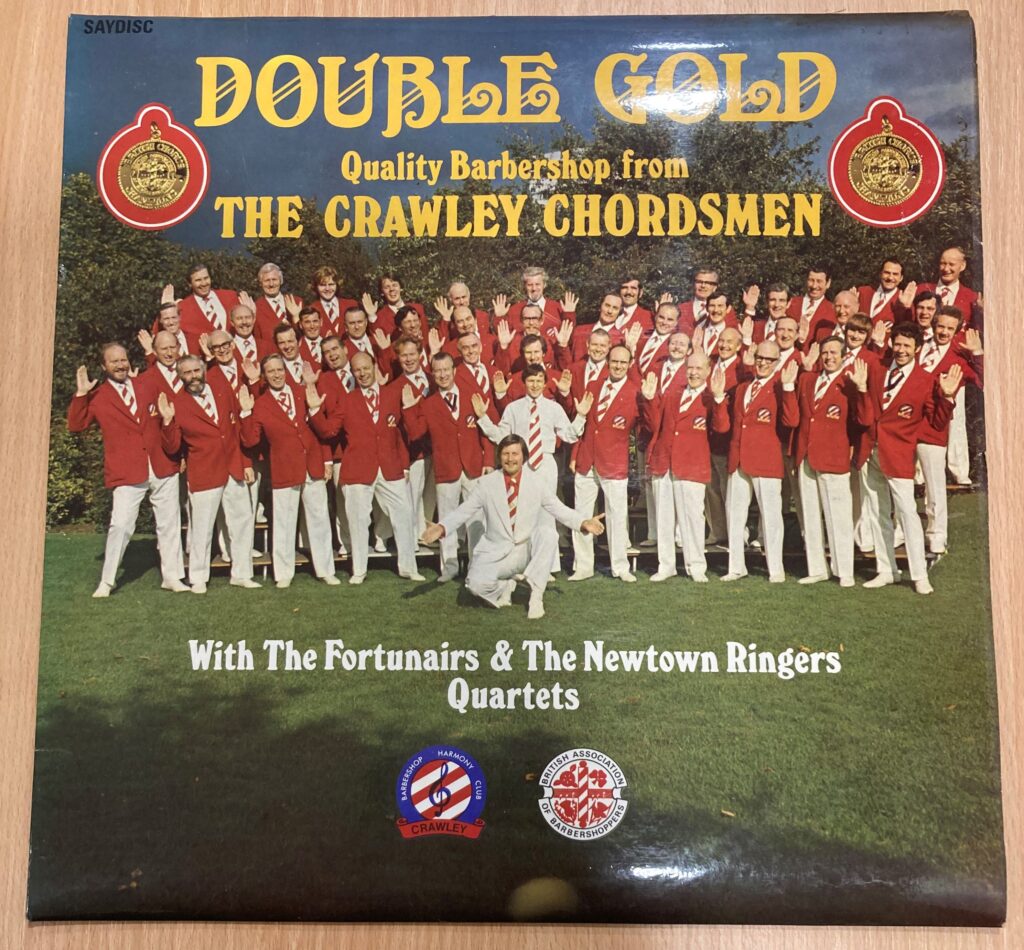 Crawley Chordsmen were the UK's first Barbershop Chorus, who started singing together in 1964. This record was released in 1977. Part of the museum collection. 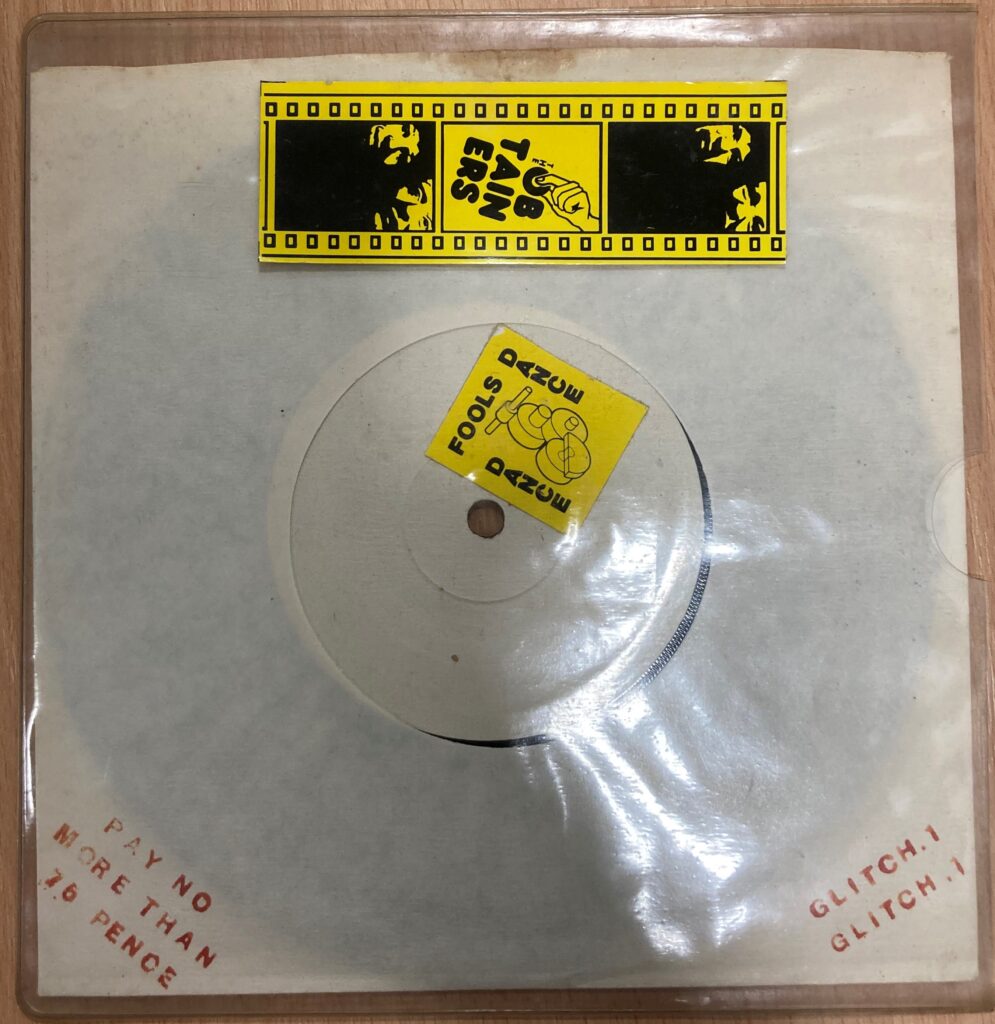 The Magspies / Obtainers, the single was released in 1979, on Dance Fools Dance a small label started up by Robert Smith and Ric Gallup. Only pressed 100 copies of this record. The Magspies is the shortened name from The Magazine Spies. The Obtainers were 2 boys aged 10 and 11 (Nick Loot & Rob Banks) using Tupperware, pots and Pans as Instruments, John Peel Played this record quite a lot. On loan from Dave Carter. 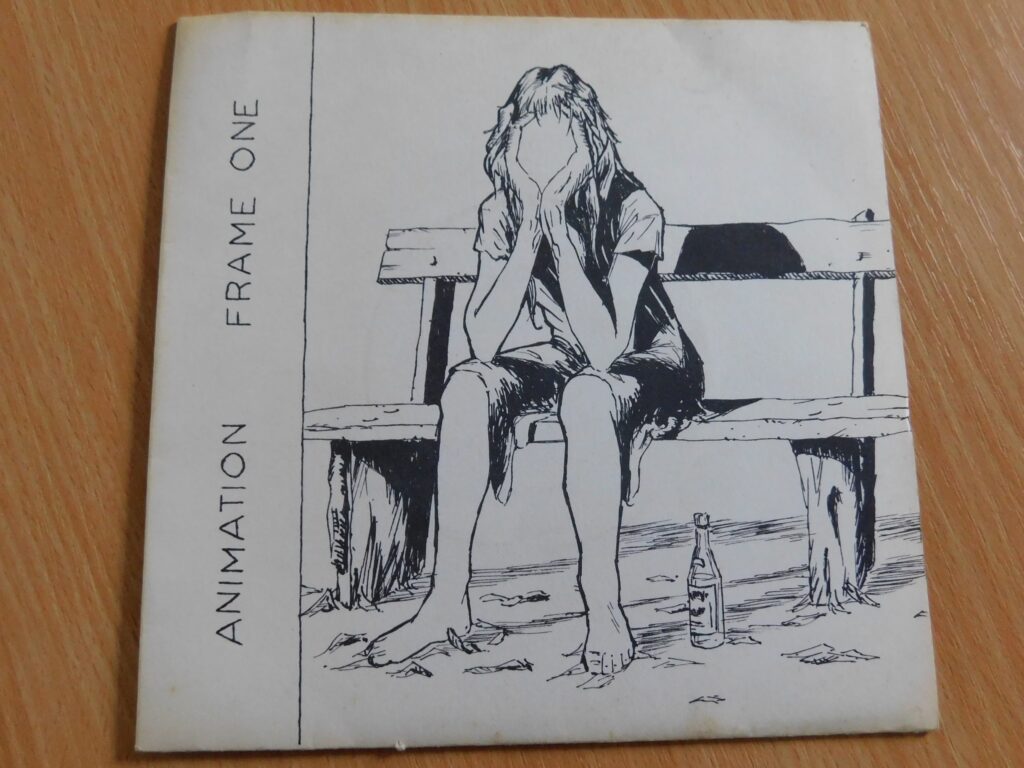 Animation were a Crawley band who organised and played at quite a few gigs in Crawley Community Centres. In 1982 they made a 7" single. It was produced by Robert Smith on his Dance Fools Dance label. There were 500 copies which were left in the back of Smith’s car for a few sunny days so half of them were badly warped. On loan from Dave Carter. 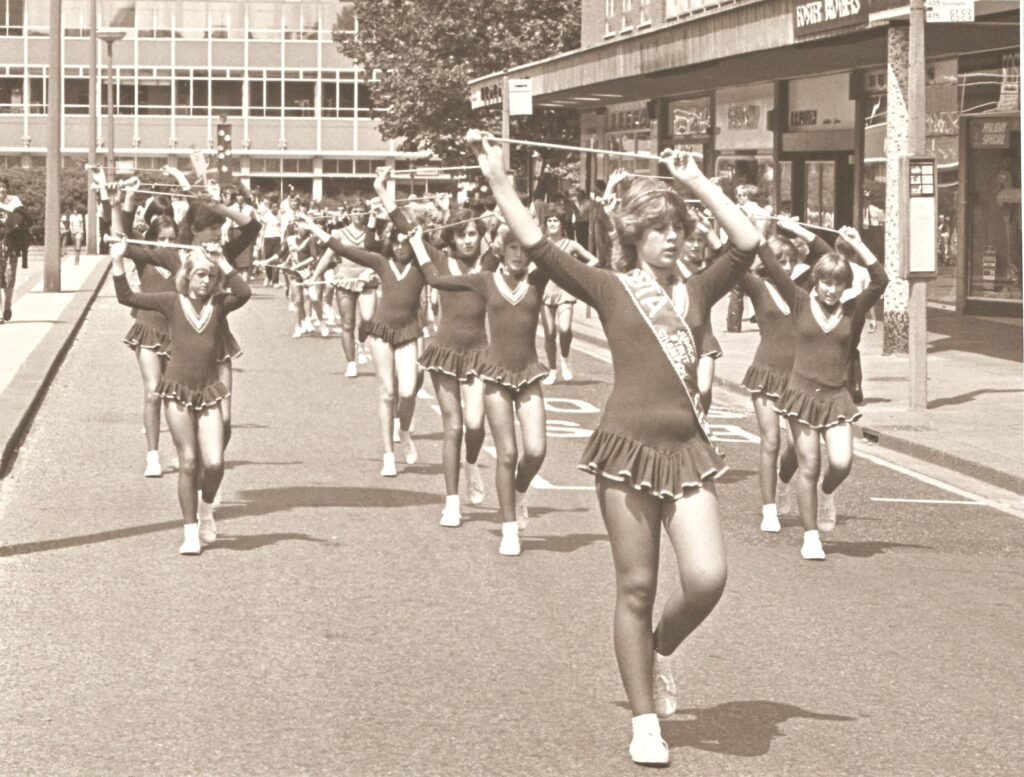 Majorettes 1979. The photograph is part of the museum's collection. 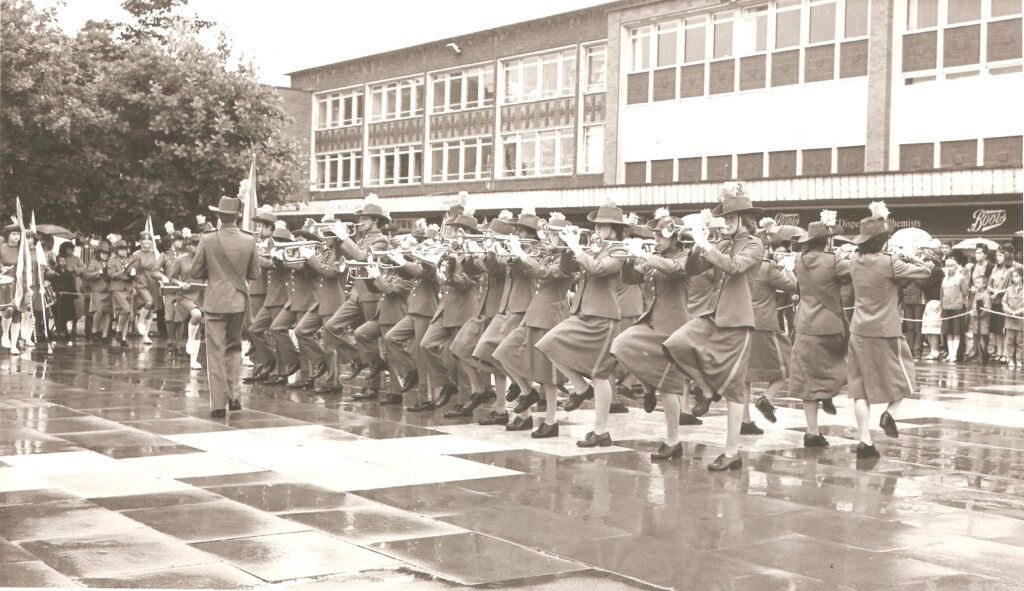 Marching band in Queens Square, 1980. The photograph is part of the museum's collection. 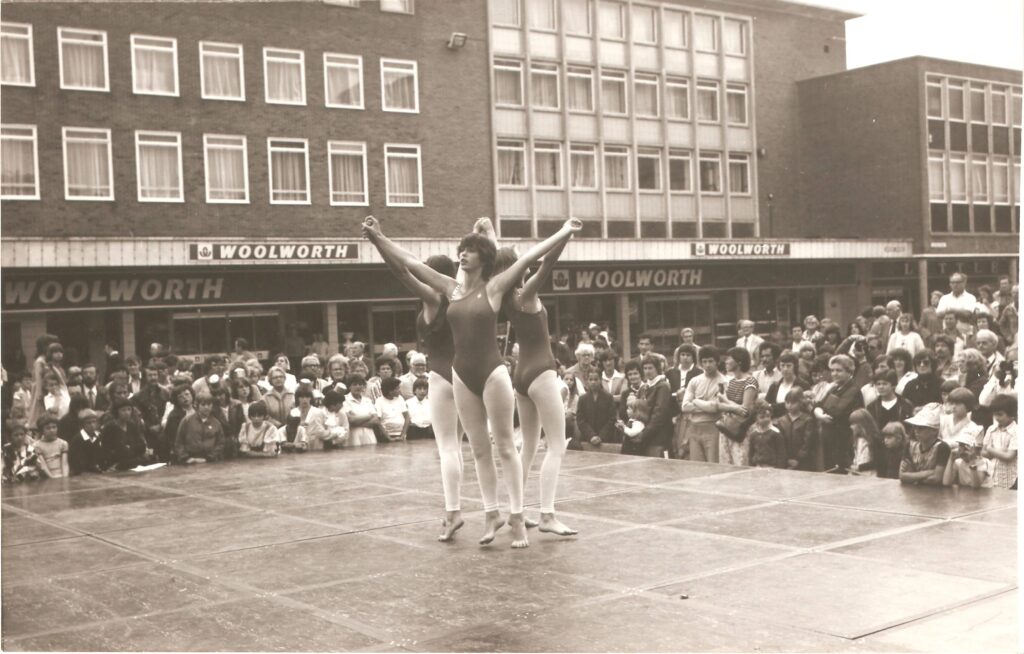 The Jordanaires Dance Group, Queens Square, 1980. The photograph is part of the museum's collection. 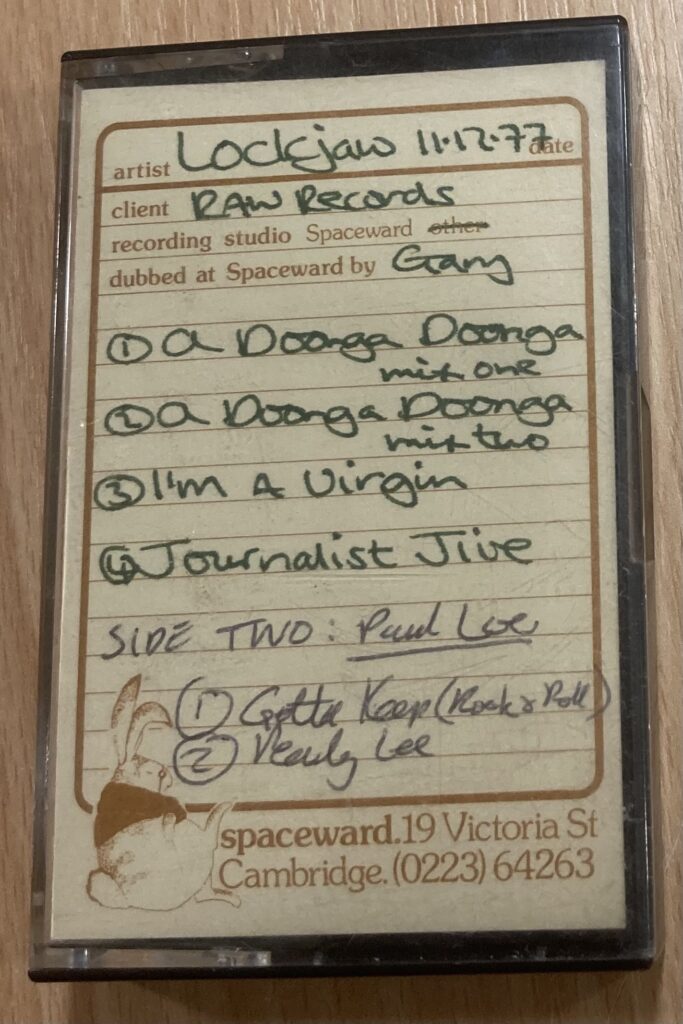 Cassette from the Lockjaw session for Journalist Jive and A Doonga Doonga. Simon Gallup was a member of Lockjaw before joining the Cure. It is hand written from 1977 and in a case from the studio. On loan from Darren Guy. 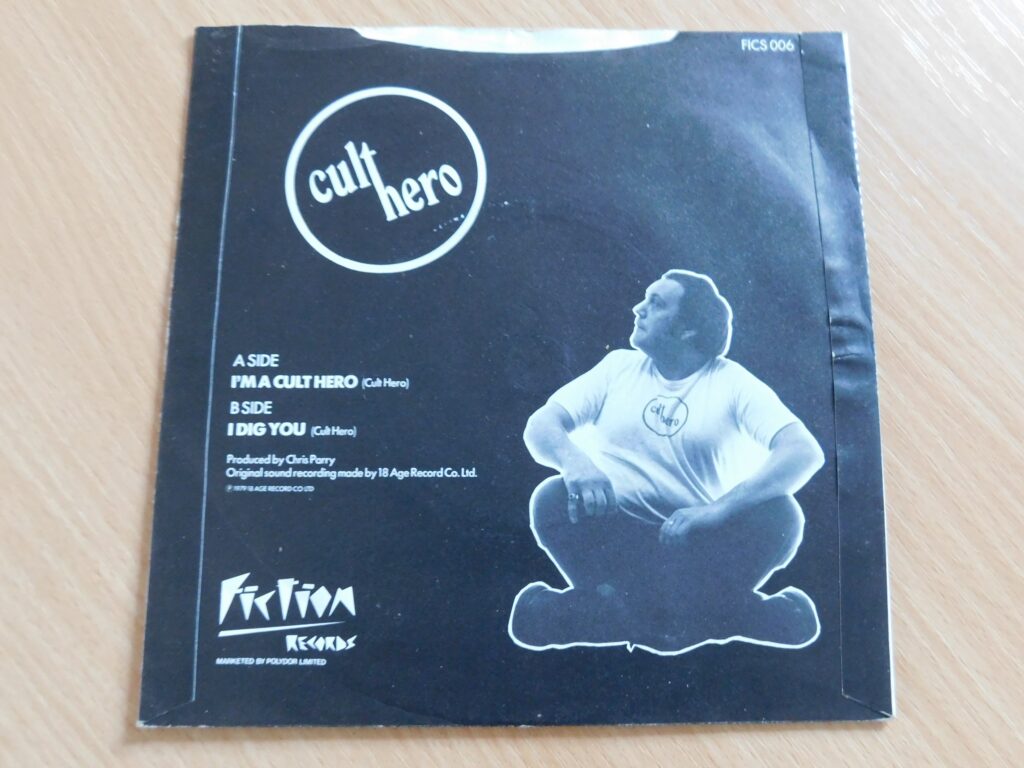 Among others this 1979 single features Robert Smith of The Cure, Simon Gallup, Matthieu Hartley, Pearl Thompson and Horley Postman Frank Bell whose photo appears on the cover. On loan from Dave Carter. 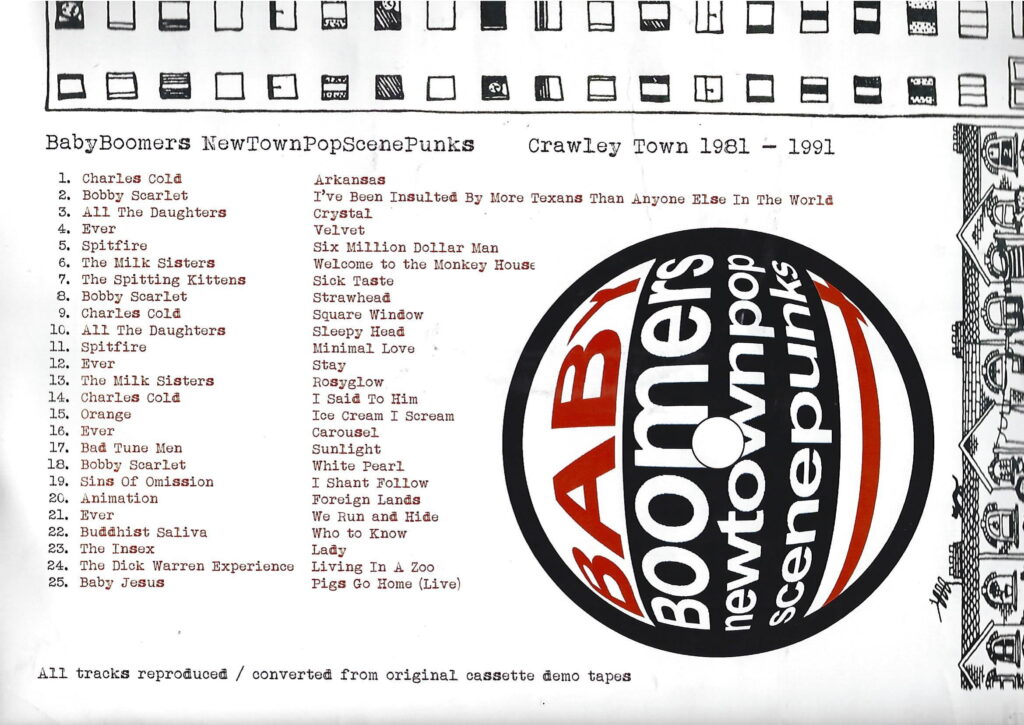 BabyBoomers NewTownPopScenePunks. Oral History and photographs from the Crawley music scene 1981-91 with accompanying CD. On loan from Jeff Pitcher. 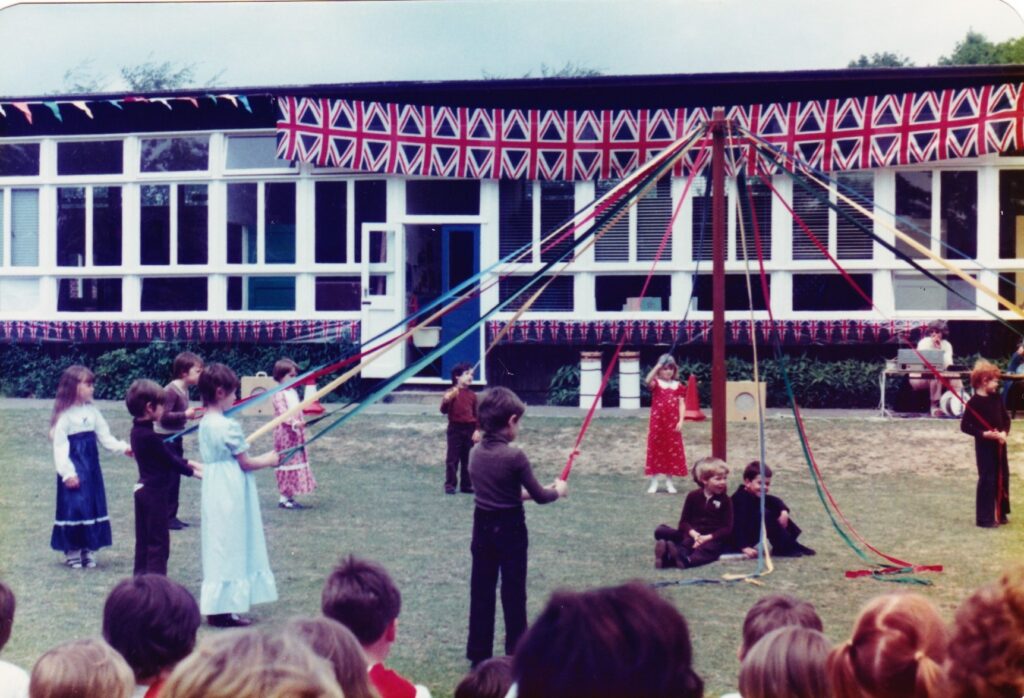 Maypole at Three Bridges Infant School. This photograph was taken in May 1982 during a dance festival to mark 30 years of the Queen's accession. It was donated to the museum by the mother of one of the young boys in the photograph. 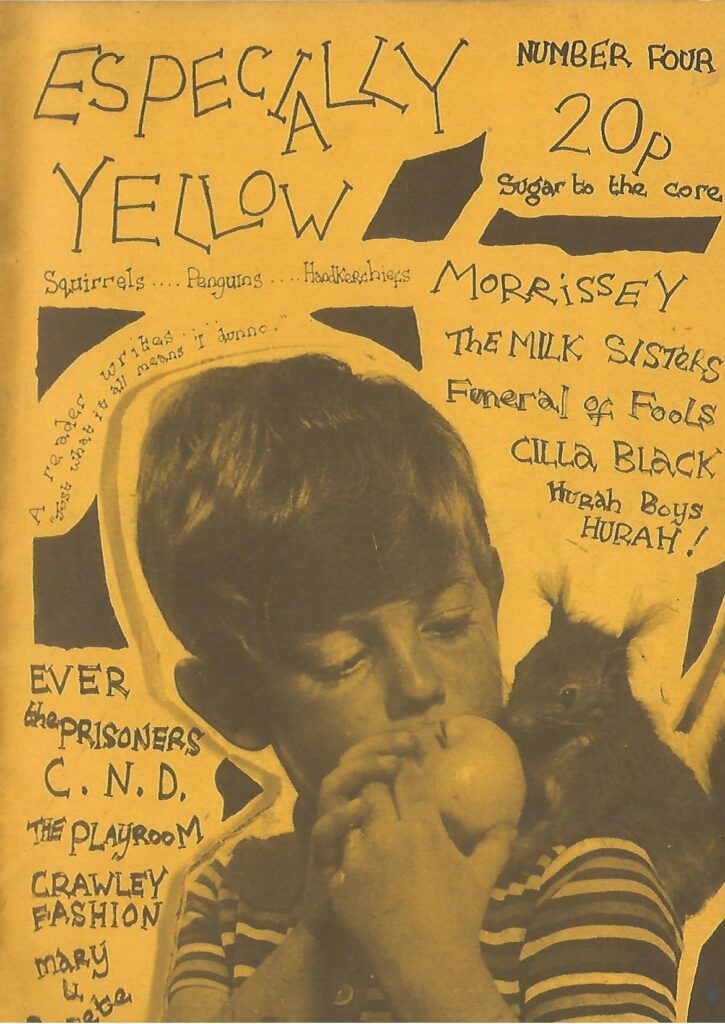 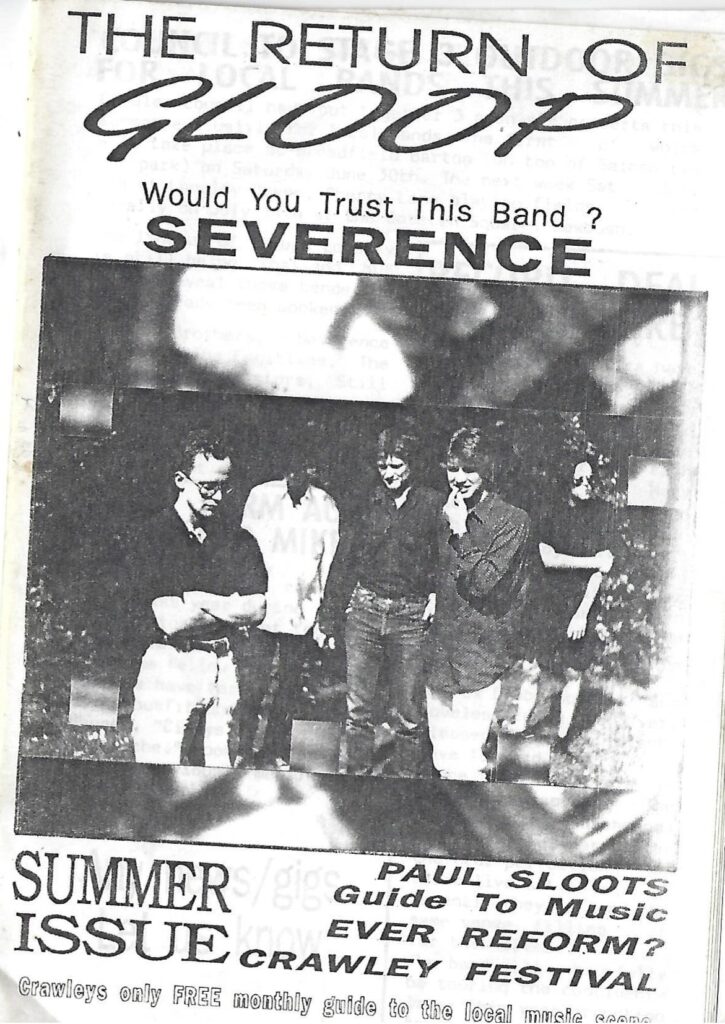 Gloop - guide to the local Crawley music scene. Loaned to the museum by Dave Carter, who played in Severance of Trust, featured on the cover. 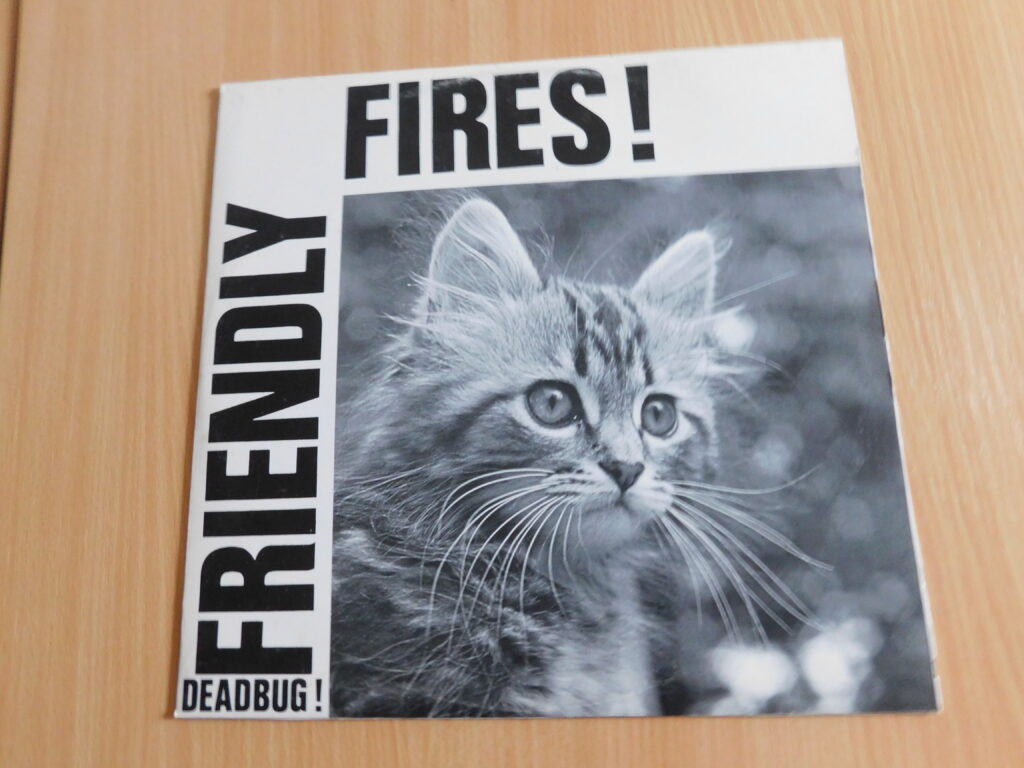 Friendly Fires record. Friendly Fires were a 1980s Indie band from Crawley. They ran their own record label - Deadbug. On loan from Dave Carter. 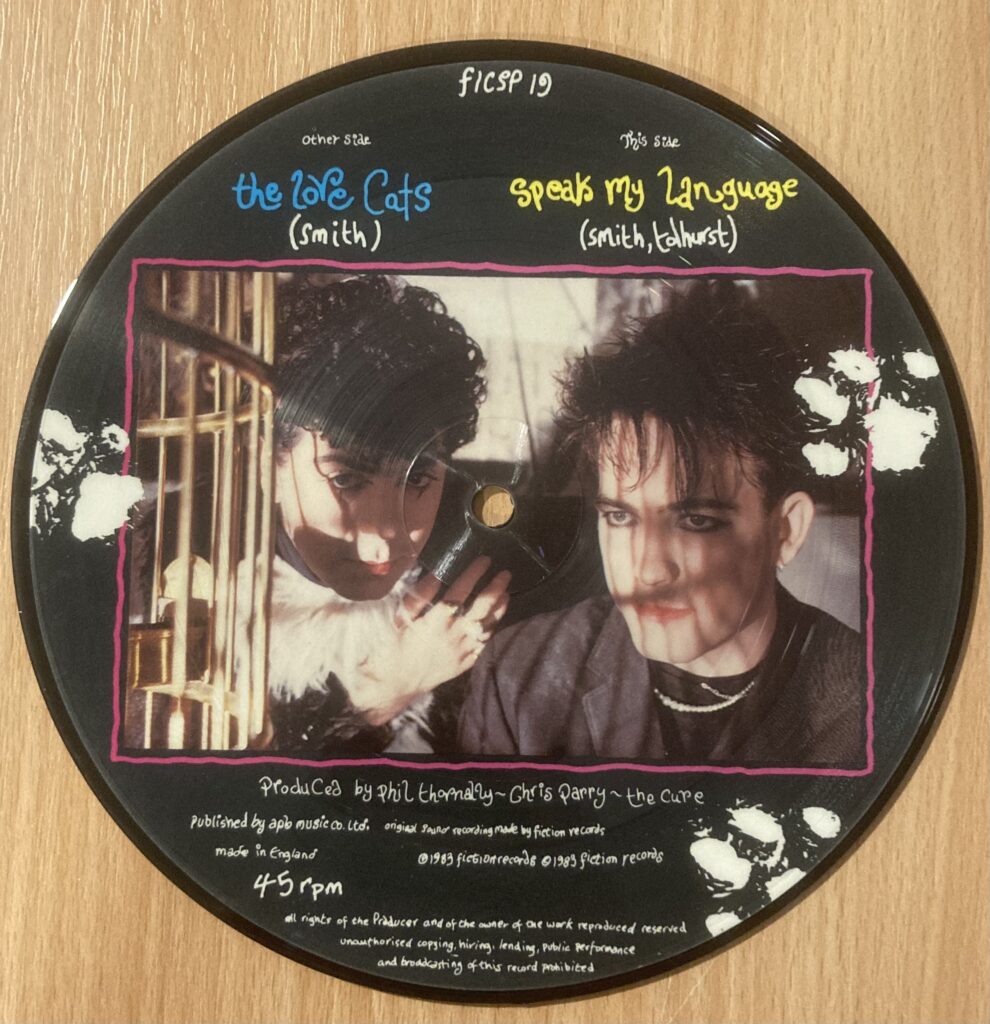 Picture disc of 'The Love Cats' by The Cure, released in 1983 on Fiction Records. On loan from Dave Carter. 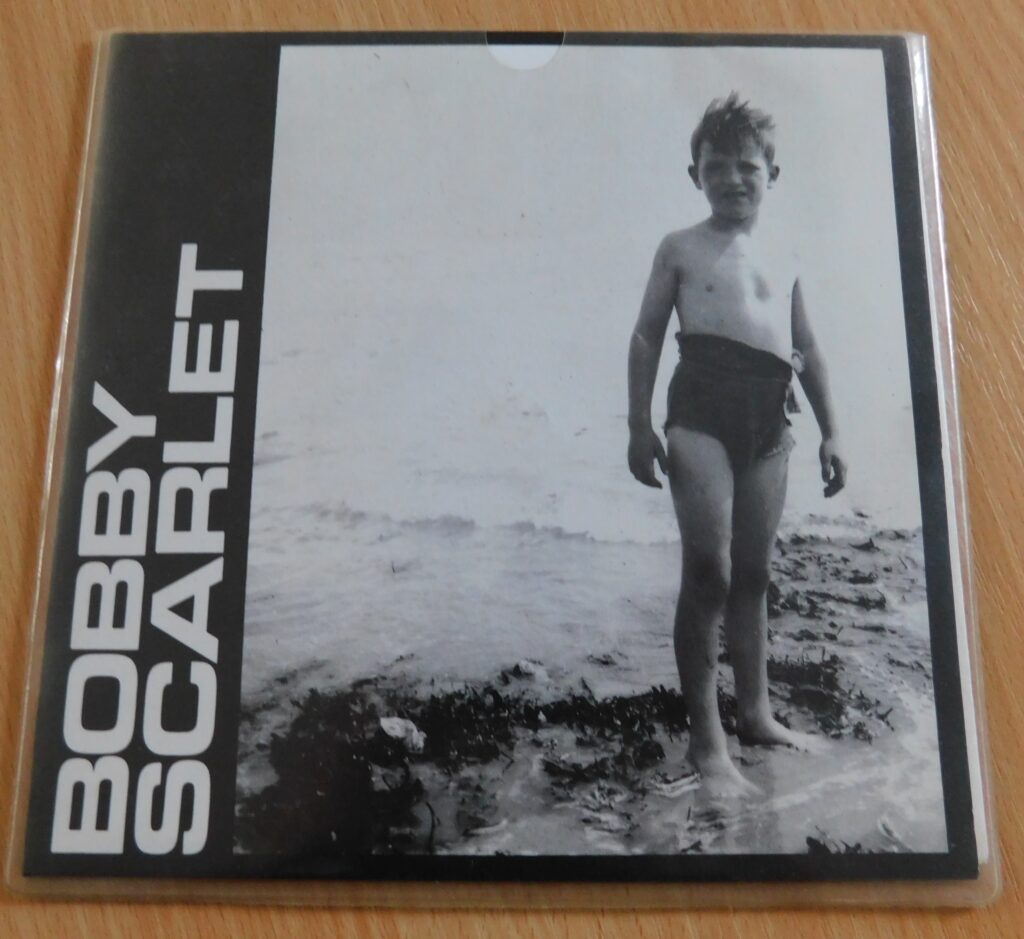 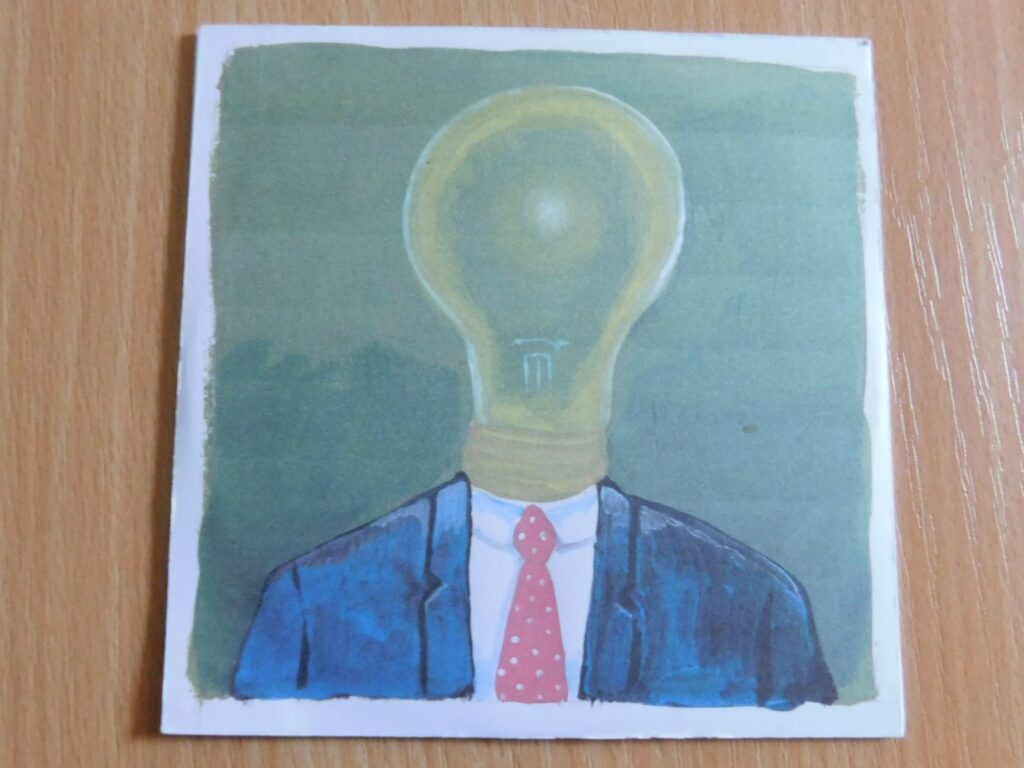 Henrys Head CD - Waiting For The Rain. Henry's Head featured the two men from the Obtainers. On loan from Dave Carter. 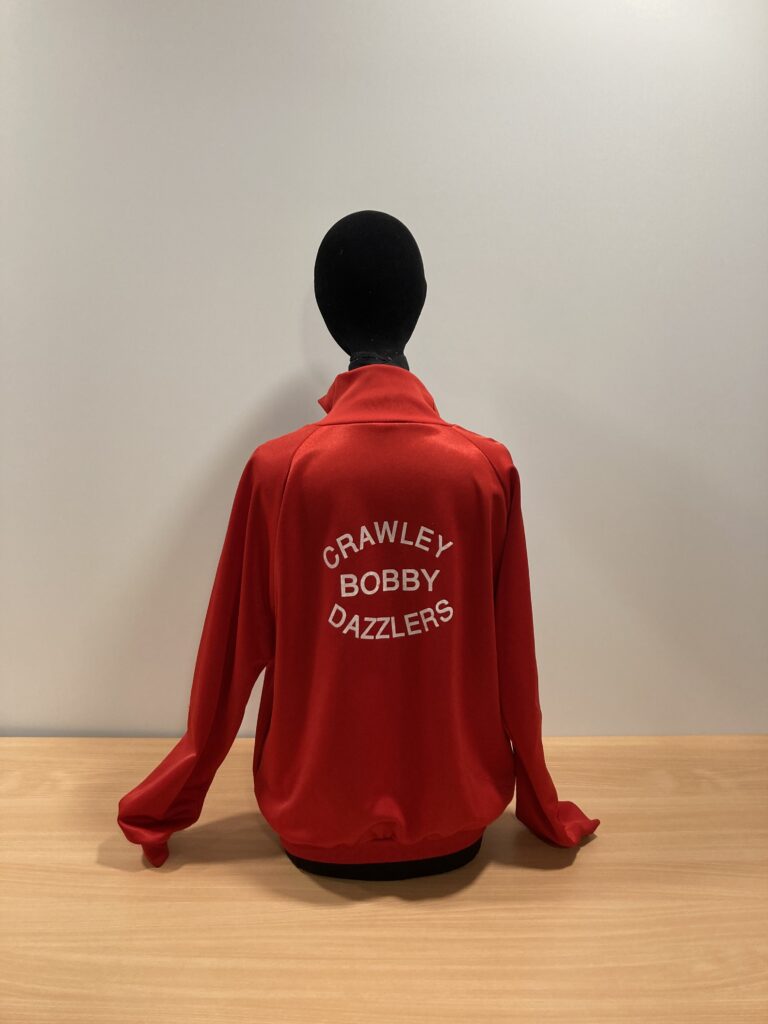 This jacket belongs to the Crawley Bobby Dazzlers, a local group of majorettes, and was loaned to the museum for the exhibition. 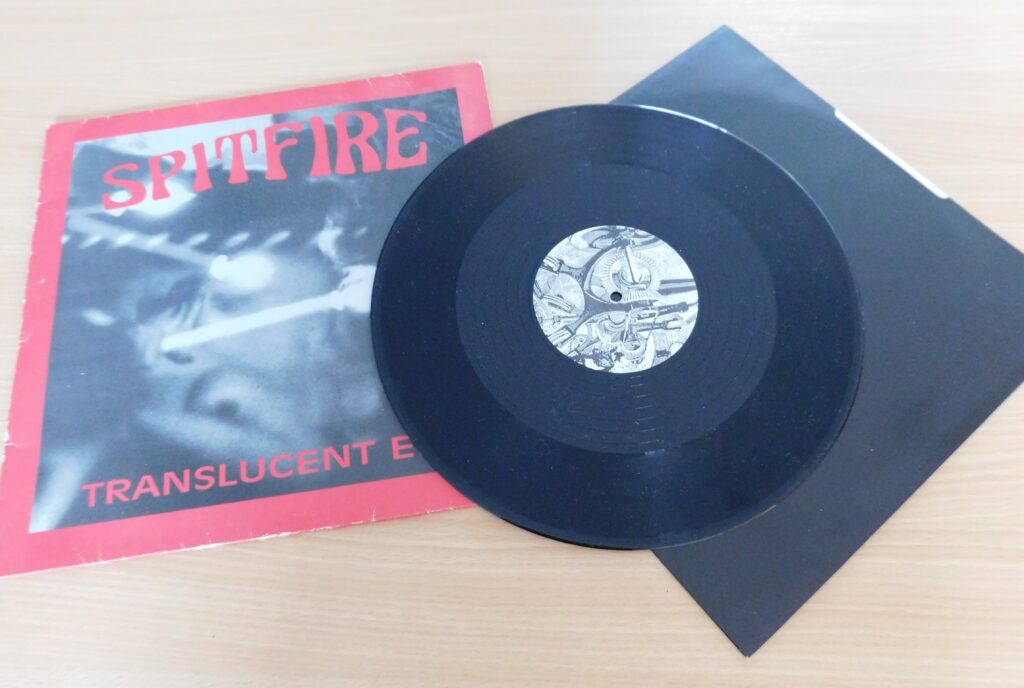 Spitfire Translucent EP. Released in 1991 on Eve Recordings. On loan from Jeff Pitcher. 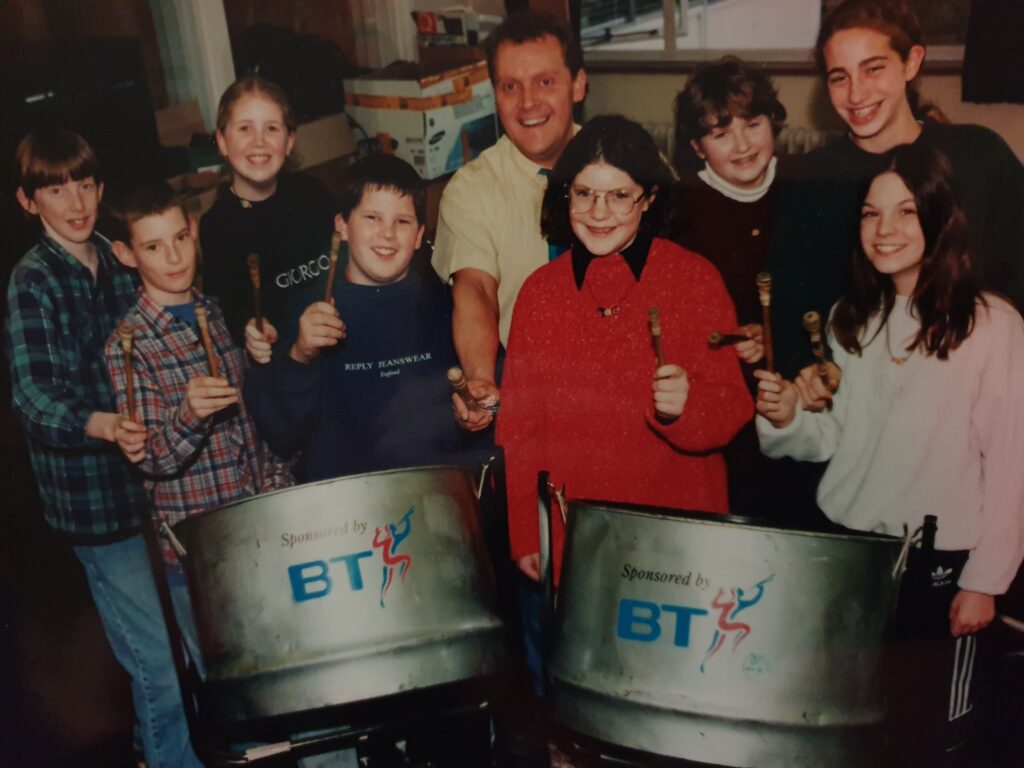 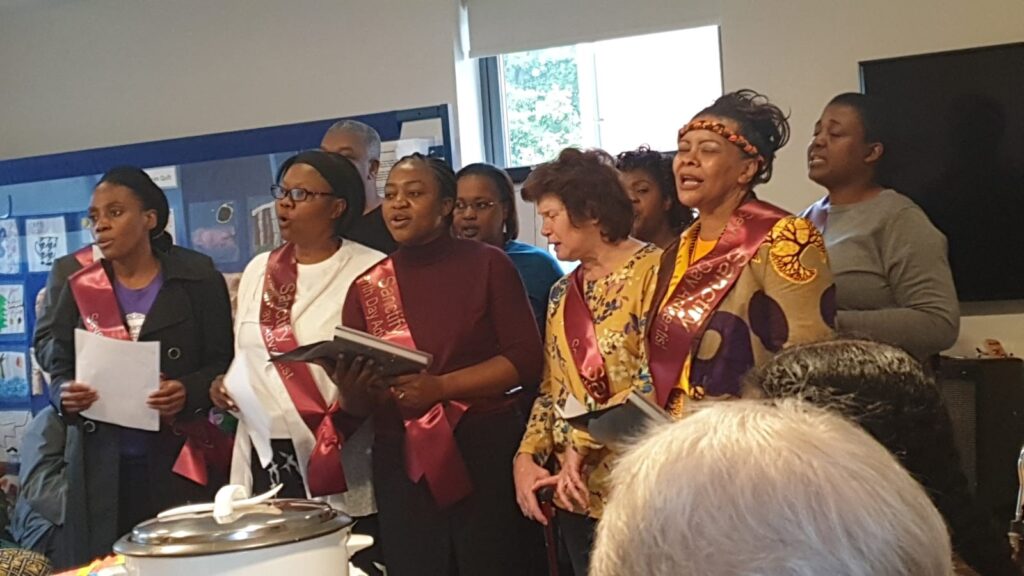 Sanctify Gospel Singers are an adult acapella gospel choir from the Gatwick Seventh Day Adventist Church and were formed in August 2018. ‘Sanctify’ means “set apart or declare holy.” They launched at Bewbush Community Centre with our most popular hymn “There’s No One Like Jesus”, sung in 3 different languages (English, Swahili and Shona), and using musical instruments like drums, tambourines and shakers. 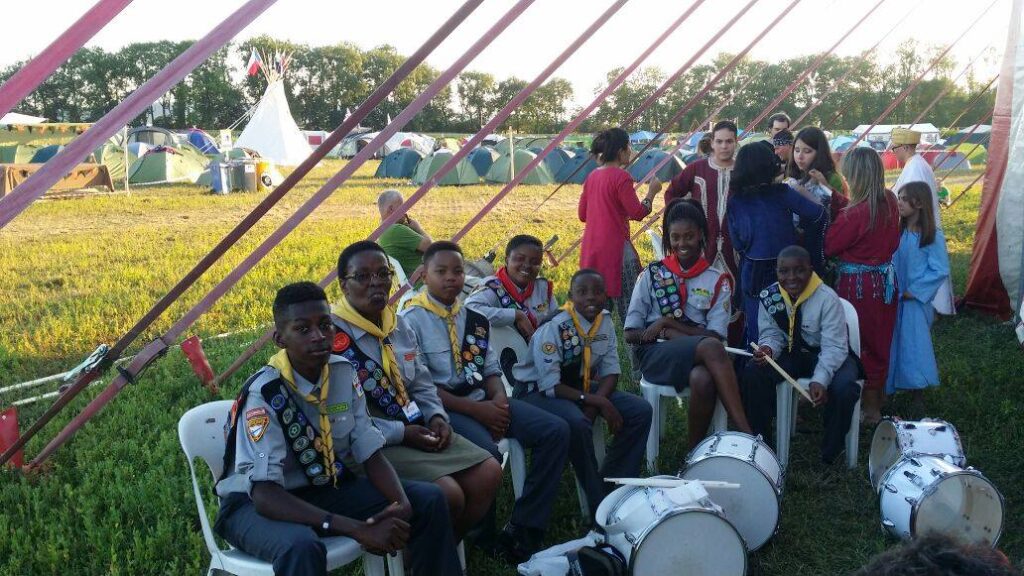 The Gatwick Highflyers Drummers are a musical marching unit formed of boys and girls aged 10 years and above from Gatwick Seventh Day Adventist church. It is part of the Gatwick Highflyers pathfinder club and is fun way for young people to express themselves through music and drums. The Gatwick Highflyer Drummers have supported various events in the Crawley community such as Remembrance Day services and Black history month events.

With the museum only having re-opened, and the fact that the music exhibition was going to end the following week, I paid a visit to the museum on Friday 21st May. I am a member and had been a couple of times between lockdowns last year, so the main difference was the music exhibition. I knew The Cure were famously from Crawley, and that Chico was, but it was surprising to learn about some of the other acts.

What I don’t know is whether what has been going on since is a coincidence, or whether the exhibition has prompted me to be on the lookout for musical links to Crawley.

On leaving the museum that Friday afternoon I soon found myself in Oxfam, and browsing in their music selection I found the 7” single by Terry Dactyl & The Dinosaurs – “Sea Side Shuffle”; something I had been reading about less than an hour before. At 49p I couldn’t resist buying it and adding it to the wall of vinyl at home.

Then on Bank Holiday Monday, Radio 2 were doing all day Popmaster, and one of the questions was “Which one hit wonder had a 1972 hit with Sea Side Shuffle”. I’m not sure I’d have known the answer ten days before, and the contestant certainly didn’t. Other questions on the day asked about The Cure, Ms Dynamite, and Chico.

Speaking of The Cure, Mojo (the music magazine) had given away a cover CD called “I Wish I Were You” in April, which was a collection of covers of The Cure’s songs. Although I’d had the CD for a while I was only really listening to it at the end of May. The track that caught my attention was one called “I Don’t Know”, which I didn’t recognise as a Cure song, but it was a hip-hop track using “Lullaby” as a sample. I was quite taken by the song, and looked at who it was by to find it was Akala – Ms Dynamite’s younger brother – and another who I had read about in the exhibition. Again I hadn’t really heard about him until reading the stuff in the exhibition. I went away and listened to some more of his tracks and now have bought his first two albums.

It’s possible all of this would have happened anyway, but I was certainly more aware of it all because of my trip to the museum.