Part-time and temporary jobs in the 1960s – Part One

Part-time and temporary jobs in the 1960s

When I was a pupil of the Thomas Bennett School (1959-1966) I was originally given a half-crown (two shillings and six pence or £0.125) a week as ‘pocket money’ by my parents, which would have bought me five Mars Bars, (had I been so inclined). This sum was later increased to five shillings (£0.25) but it was made clear that any further financial needs would have to be earned or saved from birthday monies or gifts from visiting aunts and uncles. By the time I was a teenager these sources were inadequate to fund my trainspotting expeditions or later to run my second-hand Vespa 125 cc motor scooter and so part-time jobs were always an essential feature of my teenage years.

My first proper part-time job (other regular than clandestine trips to buy cigarettes for my granny) was in 1961 when I was thirteen and allowed to do a morning paper round. This required getting up at 6.00 am on weekdays and at 7.00 am on Sundays. Thus, I was a paper boy throughout the bitter winter of 1962-3 when it started snowing on boxing day and the snow remained in place throughout January and February. It was not until 6 March that there was no overnight frost in Crawley and some compacted piles of snow were still visible at the end of the month. I would often come home suffering from chilblains in my fingers and toes, trying to get thawed out in time to get to school on time. 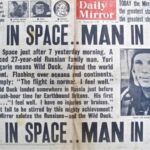 One advantage of being a paper boy was that you got to read a range of different newspapers. I clearly remember the headlines following Yuri Gararin’s space flight (April 1961), Harold Macmillan’s ‘Night of the Long Knives’ (July 1962), the Vassall spy trial (October 1962), or the prolonged and sordid revelations of the ‘Profumo affair’ (which seemed to go on throughout the whole of 1963). Like almost everyone from my generation, I vividly remember what I was doing when I heard about the Kennedy assassination in November 1963 and the dramatic pictures and newspaper headlines of the following morning.

The advent of the Sunday Times Colour Supplement in February 1962 greatly increased the workload of paper boys at weekends, sometimes necessitating a return to the shop to pick up a second bag mid-way through the round. When The Observer followed suit and started publishing a colour supplement in September1964 I decided that ‘enough was enough’ and switched to an evening paper round with only three different papers and no Sunday work. By this time, I had secured another source of employment, a Saturday job refilling the shelves of the Woolworth store in Queen’s Square – the first self-service store to come to Crawley.

My uncle worked for Fry’s (London) Ltd and he secured me an Easter holiday job at their subsidiary company, Enox Tools, in Faraday Road, Manor Royal, when I was sixteen. This led to further employment during the summer of 1964. Enox Tools made hacksaw blades and assembled hacksaws and hole cutters. I believe I was paid 2/3 (12.25p) an hour. The work was rigidly controlled by the factory hooter which signalled the start and finish of each working day, the lunch hour and two fifteen-minute tea breaks. Any lateness or early clocking off resulted in fifteen minutes being docked from your pay. Factory workers were allowed only five minutes at the end of the working day to wash and change out of their working clothes. 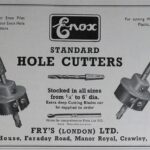 I worked at several jobs during my weeks there, such as stocktaking in the stores, on an assembly line with full-time female workers assembling hacksaws and pipe cutters. The conversation could get very ripe at times especially for an immature lad. Sometimes I pretended not to hear or at least not to understand their innuendos. Another job was to work on a press which bent lengths of hacksaw blade into a circle for use on the larger hole cutters. It was monotonous work and the women who did it full-time developed large muscles on their right arms (which pulled the press lever) whilst their left arms (which turned the blade) remained slender. The worst job, however, was to hang hacksaw blades onto hooks for a machine that dipped them in blue paint which was then baked in place. Constantly handling the blades meant that my hands received innumerable scratches (nobody said anything to me about gloves). These scratches quickly became dirty in the dusty atmosphere and it was soon impossible to get my hands clean. However, during my final week, I was put to work on a lathe shaving off the weld seams on smaller forged hole cutters. The cutting edge was bathed in a white oil which miraculously cleaned my otherwise permanently dirty looking hands. I’ve no idea what effect this would have had if I’d worked on this job for more than a week.

The factory employed many Bengali men, who arrived and left by coach each day. They were the first Asians I had encountered other than the waiters at the two Chinese restaurants in the town. The Bengali men worked mainly in the noisy and dusty foundry and tended to keep themselves to themselves. Most did not speak English  but had their own bi-lingual foremen. I was impressed by the wonderful smells from the food that they brought for their lunch boxes. (Curried baked beans were thought to be exotic and garlic was something that only foreigners ate in 1964!). I gained favour with a couple of older lads at the factory by letting them try out my motor scooter round the back of the factory during the lunch break. They were ‘Rockers’ with 500cc motorbikes and would have been ashamed to be seen riding anything so effete as a Vespa 125cc scooter in public.

My weeks of factory work taught me one thing – how dull such labour could be and how many workers lived only for the hooter sounding their next break or the finish of the day. There was certainly camaraderie and a degree of banter among the full-time employees, but many of the jobs involved sitting alone at an individual machine. The redeeming feature (other than the weekly pay packet) was the Tannoy. Britain had just discovered Tamla Motown – Mary Wells and the Supremes, and the early Beatles hits were constantly played.

Great read, takes me back to the 60,s . I remember that bitter winter of 63, the cold going on and on. Even my bedroom window was frozen on the inside (no central heating then).

Yes I agree. Your breath would be visible when you woke in the cold air and the linoleum flooring always seemed to be several degrees colder than the ambient air temperature!