Memories of The Cure 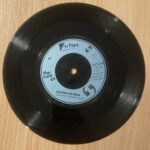 I remember when I first heard The Cure. It was March 1979. A friend played me ‘Killing an Arab’ and introduced it to me with the words ‘they come from Crawley!’ The local music scene at that time had certainly never seen or heard anything like it. I was amazed. The band played locally regularly. Places like Crawley College and of course the Rocket and slowly but surely their following grew until they were touring the country and Europe just like a ‘proper group’.

In those days it didn’t seem to matter where you were around the area you were quite likely to bump into The Cure. I’ve been in the Kings Head with Robert Smith and waited for a Chinese takeaway with Lol Tolhurst. I went to school with Simon Gallup at Balcombe Road Comprehensive in Horley . I ‘m sure it must have been the same for many other people.

‘Seventeen Seconds followed ‘Three Imaginary Boys’ and was in turn followed by the awesome ‘Faith’ and the cutting edge frenzy of ‘Pornography’. And if you didn’t see them you always heard talk of what they were up to. As the band started to become more and more successful throughout the 80s tales of their adventures would find their way home. They were the talk of the town when out of nowhere they released ‘The Lovecats’ a crazy pop song that broke new ground for them and introduced the band to a whole new audience. They were headlining Glastonbury by the mid 80s. I remember seeing them there in 1986 as a huge thunderstorm came rolling in. Very goth!

A good read Renny . I too was in the Kings Head and was introduced to Simon Gallup in there, about the time when he first was in The Cure.

I was a friend of Paul Thompson at Thomas Bennett and his Sister Carol. Paul was in a school Band called Nomad and I was in a band called Phase Four. Paul was a founder member of ‘Easy Cure’ then changing their name to ‘The Cure’. Now I believe he is known as Pearl Thompson and lives in Cornwall as an artist. Fond memories as teenagers.