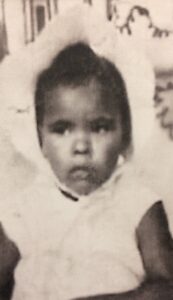 I was born Marilyn Mutambira (nicknamed Punkie) in Rusape, a small town in what was then Rhodesia (now Zimbabwe) on 23 September 1958.

We visited Rusape a lot because my dad wanted us to know our roots. The bus was old and noisy, with chickens, people selling eggs and loud African music blaring. Close to Rusape there was a dirt road, very bumpy, and we’d see baboons. I once saw a chameleon. When the bus couldn’t go any nearer, my Dad would put me on his back and walk up to the village.

At a very early age, it was explained to me that my ancestors had been moved from a fertile area to an infertile one, that their land had been taken. So I was always aware of that injustice.

Everybody had mango trees, guava, pawpaw, bananas. My dad planted an orchard and he also planted 10,000 gum trees that are still there today, a legacy he left.

My first childhood memory is watching a chameleon slowly crossing a road and changing colours, including changing to the colour of my very own printed dress! That was both fascinating and scary.

We moved to Harare when I was four, to a high density area, so not affluent, because my dad was pure black. We stood out, being mixed race in an all black area. It was a terraced house and we knew everybody in the neighborhood. We couldn’t wait to get up in the morning and knock on each others doors, you know, time to play. And we didn’t come home until sunset. 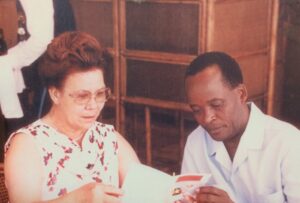 We were going to Mum’s family in South Africa. At the border, the trains were split ‘Whites Only’ and ‘Non-Whites.’ Mum didn’t want to leave us. The guard said “If you’d done the proper thing and not married a black man, you wouldn’t have this problem.” I remember those words clearly.

I remember the civil war because blacks had an option to become freedom fighters but the mixed race people had to join the white army to fight the freedom fighters. So we had to fight some of my cousins, so it was quite a dilemma and it was compulsory for the boys.”

I left Zimbabwe for personal reasons, and landed at Crawley Hospital for my nursing adaptation course in 1990, after 200 rejections. I thought, “Someone could raise their kids quite comfortably here.”So I decided to give it a go!

At that time, seeing a black person was a novelty. I’d go straight up to them and ask them round. I used to cringe seeing people hugging their bags and crossing the road. I don’t blame them; it’s what the media portrays.

I missed family and friends. I phoned my children frequently and bought tickets for them to come at Christmas. We’d never seen snow and had a great time. I vowed to make a home for them.

When my grandson was born, I wanted him to know about Africa.If you know who you are, you won’t have that ‘lost’ feeling we had. So we formed the Afro-Caribbean Association, met in our homes and talked about our heritage. And that’s where Crawley Black History was born – of which I was a Founder Member.

DIVERSECRAWLEY and Crawley Campaign Against Racism

In 2016, I became Co-Chair of Crawley Campaign Against Racism and my main focus was the “Stop and Search Scutiny Panel” to try and bring the 10:1 ratio down (10 Black/Brown people stopped by Police nationally to every one White person), without an arrest!

When Crawley celebrated its 70th Anniversary as a New Town I felt there was not enough Diversity in the programme, so I Co- founded DIVERSECRAWLEY, which has 9 committee members from different cultural backgrounds, and we have been very active in the community since 2017.

The Covid-19 Pandemic in 2020 highlighted the discrepancies of how BAME population members are affected more by the virus, as well as by the Police (more Lockdown fines etc) and the murder of George Floyd by a Policeman in USA, compelled me to be active in the “Black Lives Matter” movement, locally.

Crawley is the “furlough capital of UK”, with unprecedented hardship due to the collapse of the Aviation industry ( Gatwick Airport – main Crawley population employee), due to Covid-19.

I walk around town now and it’s not what I knew 30 years ago. There’s a great diversity and its something to embrace, because everyone brings something different to Crawley and makes it richer and I think that’s good for our children, grandchildren and for generations to come.