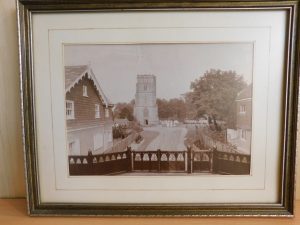 John Barrett-Lennard served as Rector of St. John the Baptist, Crawley, for twenty-two years in the late Victorian period.

Born in 1839, he was the fifth and youngest son of Sir Thomas Barrett-Lennard and Mary Shedden, his father being ‘an advanced and independent Whig’ who was MP for Ipswich and then Maldon in Essex on three occasions between 1829 and 1852. The family often spent time in Brighton in the period when it was first becoming fashionable; Barrett-Lennard would retain his connections with the town throughout his life.

Barrett-Lennard followed what might be seen as a typical career route for a younger son of the gentry, initially becoming a Lieutenant in the Royal Engineers, a vocation which seems not to have suited him, as he held junior posts in the Anglican Church in London and Shropshire before arriving in Crawley in 1876.

Despite his fathers’ political leanings, John Barrett-Lennard was a staunch Conservative. As Rector of the parish, he would have traditionally been entitled to income from tithe payments, but since the Whig reforms of the 1830s the rights of the parish to such monies had been curtailed. The privileges of the Anglican Church had also been under threat from Gladstonian Liberalism since the start of the 1870s, especially from policies on Church disestablishment, and land and local government reform. The latter progressively weakened the formal role of the parish in local decision-making, with the vestry meeting gradually being superceded by elected parish councils in the 1890s.

Barrett-Lennard followed the path of the ‘Low’ or Evangelical Church in his approach the Anglicanism. Since the 1830s, the Church had been torn between those who wished to see a return to a more ritualistic, Anglo-Catholic approach to worship, typified by the Tractarian or Oxford Movement, and those who wished to retain the principles of a Reformed Church, that minimized emphasis on priesthood, sacraments and ceremonial in worship. This was at a time when the number of people regularly attending church was falling, with the proportion going to their local parish church well under half the total. Indeed, the controversy over forms of worship led to anti-ritualist riots in many places, including Lewes in 1857 and in Brighton in 1860s.

Barrett-Lennard would have been very aware of these problems in the Church when he arrived in Crawley in 1876, and the stagnating conditions he faced at St. John the Baptist would have confirmed the need for speedy action.

Peter Gwynne says of Barrett-Lennard that he ‘… was a strong but unorthodox parson. He was a good advertisement for what was elsewhere called ‘muscular Christianity’. Sometimes he walked to Brighton, then along the Downs, before walking home. During the week he dressed in grey tweeds and only wore his clerical collar on Sundays.’

The Anglican Church in the parish faced a number of problems. It is often written that the 1880s where a turning-point for Crawley, and in terms of improvements in lighting, drainage and sewage, road surfacing, and general social and economic improvement, this was the case. However, despite the arrival of the railway, the population of the parish throughout this period remained under 500 (unlike in Ifield where in steadily grew). There was also healthy competition for the souls of people living in the area, with improving facilities for Baptists, Congregationalists, Quakers and Roman Catholics during the 1850s and 1860s. Ifield Anglicans were catered for with a new chapel of ease in West Green, in 1880.

But the most serious challenge facing Barrett-Lennard was the physical condition of St. John’s itself.  Despite some earlier attempts at restoration in the 1840s, by 1876 the interior of the church was damp and the woodwork rotting. The churchyard was overgrown with weeds and inhabited by sheep and chickens. People had encroached on church land to built mean houses and huts. In 1881, the churchyard was closed by the Home Office due to lack of space.

Barrett-Lennard set about restoring the fabric of the existing church and extending it’s use. Raising money through public subscription, in 1879-80 a north aisle and seating was added, the altar raised, and the gallery taken down and reused as choir stalls. The chancel was enlarged, with an organ chamber and vestry. A keen campanologist, he installed a new peel of bells and formed a band of ringers. He used his woodworking skills to carve new ornamentation to the stalls.

In the last years of his life, Barrett-Lennard raised more money, through a High Street Improvement Fund, to open access to the church from the High Street, demolishing two cottages and making a wider entrance. He had plans to do more, but died before they could be put into effect.

Apart from this and his duties as parish priest, Barrett-Lennard was an active member of the local community. He was a popular speaker, especially when such duties were attached to a public dinner; he attended all the dinners laid on by local clubs and societies! In 1882, he helped found the Crawley Debating Society, along with other local luminaries such as Dr.TH Martin and businessman George Simmins. As part of his educational work, he promoted football and boxing as improving sports for young men, very much in spirit of ‘muscular Christianity’.

He was a member of the ‘Loyal Deerswood’ Lodge of Odd Fellows, dedicated to the improvement of the working man’s moral character, through ‘thrift, forethought and prudence.’ This would have paralleled the work of a thriving temperance movement in the town in the latter years of the century.

He was not always in accord with the leisure pursuits of the local community, in particular attacking rabbit coursing and sparrow shooting as having an ‘… evil and brutalising effect … upon many of the uneducated spectators.’ When questioned on why he condemned these pursuits and not fox hunting, he declared: ‘I have no more sympathy for the cruelties of the rich than I have for the cruelties of the poor – much less, in fact, for the better educated man ought to be more humane.’

Other stories about Barrett-Lennard are equally illustrative of his character, such as his berating of a gypsy woman for putting her washing out on a Sunday, or his facing-down of a quarrelsome workman who invited people to fight him when the pubs closed on Sundays.

He died in December 1898, aged just 59. His memorial tablet near the pulpit in St John’s reads: ‘through his energy this ancient church was restored, enlarged and beautified.’ He was succeeded by his son Herbert, who remained Rector until 1928.

John Barrett-Lennard stands as an example of the sturdy, upright Victorian gentlemen who oversaw the growth of the Crawley-Ifield-Three Bridges area in a period of rapid change and improvement, creating a relatively prosperous commercial-agricultural community, equal to any town in the north of Sussex.

No author (1981) The Parish Church of St John the Baptist, Crawley, Sussex.