One of the most interesting ways to approach local history is through the memories of those who were there. While taking into account the vagaries of memory, reminiscences of the past provide a unique source of information for the historian.

In the case of Crawley before the First World War, the memories of Daisy Warren* provide an extensive record of life in the Edwardian period, seen through the eyes of a young girl. Daisy was born in 1895 at 30 High Street, above the shop bought by her father, for her mother to run as an ironmongery. In her reminiscences, she is therefore remembering events that happened when she was eleven years old.

Daisy came from an old Crawley family, with strong principles. Her father, Charles Warren, was a dedicated Liberal and Secretary of the Crawley Temperance Society. Politics played a large part in his life; Daisy recalled that Conservative supporters living in the big houses south of the railway and elsewhere, would withdraw custom from the ironmongery rather than buy from an active Liberal.

‘At election time he was also to the fore, going round the villages with others canvassing for the Liberal Party, losing customers through his beliefs … you stood for what you considered right without fear of the consequences.’

Harry Court was a local preacher and a staunch teetotaller; he earned a living as a sign writer and ran a shop selling paint, wallpaper, leather goods and shoe nails.

The General Election of 1906 is now seen as a turning-point in British politics. The Conservatives had been in power for all but three of the previous twenty years. Apart from a four-year period in the mid-1870s, the Horsham constituency had returned a Conservative MP at every election since 1874.

The Conservative office in Crawley was:

‘… a small shop with a square bay window of smallish panes … It was painted red (the association of Conservatism with the colour blue only officially began in 1949. Before that political parties used various colours depending on geography) … Posters were displayed. This was before broadcasting, elections were spread over several weeks. Every night the election results came through. The Tories had a sheet erected … the results were thrown on the screen (a sheet fixed to the wall of Rich’s the tobacconist) from a lantern with slides fixed in the upstairs window of this Tory office.’

Liberal Party meetings were held in The George, under the chairmanship of a Mr Lehman of Ifield Lodge.

‘Mr Herbert Soan … was agent here and armed with a bell he would shout from the open window ‘Holler, boys, holler, another Tory gain’, and quietness when it was a gain for the other side … Those were days of great enthusiasm. Men armed with posters and paste pots would get up in the middle of the night and plaster the shop windows of the opposition and they used the most awful paste that was like glue. Lord Winterton, when Lord Turnour, and very young gave his first speech out of the upstairs window, I believe.’

Edward Turnour – from 1907 6th Earl Winterton – had first been elected to Parliament for Horsham in 1904 at the age of 21, the youngest Member in the Commons at the time. He was to remain in the Commons until 1951; his peerage being Irish, he was not disqualified from sitting.

He won the 1906 election with a majority of 617 votes, gaining 4,903 votes to 4,286 for the Liberal candidate, RL Erskine. In the January 1910 election, which Turnour won easily, there were 908 electors in Crawley and Ifield parishes, of whom 833 voted (all male, of course). The strength of the Conservative vote in the Horsham constituency had been shown by the fact that the candidate in both the 1895 and 1900 elections had stood unopposed, and Turnour would do so again in the December 1910 election. 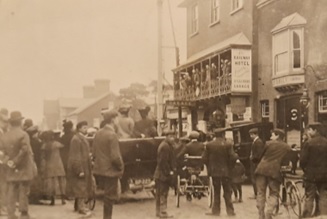 The result of the election is announced at the Railway Hotel. Photo: Crawley Museum

Daisy recalled: ‘Jimmy Swabber … was a little old man. His real name was Leadbeater or Libeeter but he was known to everyone as Swabber, nicknames were much more fashionable then … Occasionally Swabber was seen as a sandwich man carrying boards front and back. For the 1906 election the Tory party engaged him and provided him with one of those large carriage umbrellas and stuck Tory bills all over the umbrella. Swabber had to walk up and down the street ringing a bell. Being so short the umbrella nearly covered him and he quite unaware what was happening behind him. Dad walked up behind him and set light to his bills, much to Swabber’s amazement. These were days of independent daring at election times.’

‘On election night there was an air of excitement; Longley’s were building Midhurst Sanatorium and most of their workmen were Liberals. Would they come to vote? They had to walk four miles to Midhurst station and take the train from there at their own expense and then hope to arrive before polling closed … Longley’s men made it and they marched down the street from the station to the British School (the polling station). We leaned out of the window to see them turn the corner with everyone cheering.’

It must be remembered that working men had only achieved the vote in 1884, when the Third Reform Act extended the franchise to men paying an annual rental of £10, and all those holding land valued at £10 now had the vote. This meant that agricultural labourers could vote for the first time.

The level of enthusiasm for participation in elections can be seen in the following comments from Daisy’s reminiscences:

‘Political meetings were also very enjoyable as there was heckling and shouting. These open air meetings were held in the Square just in front of our shop… Scuffles took place between supporters and there was great excitement when the ‘Roughs from Roffey’ arrived – they would break up a meeting, but I do not remember which side they were on.’

‘…Placards showed the Big Loaf and the Small Loaf at the time of the Tariff Reform Bill and Free Trade. Our family supported all the unpopular causes: Liberalism, nonconformism, temperance and anti-vaccination, so we listened to every sort of meeting …’

This provides a good summary of some of the key issues around which the election was fought. The issue of Free Trade, as opposed to the introduction of protectionist tariffs that many Conservatives were pushing for, became a key plank in the Liberal platform. The contrast between the Liberal ‘little loaf’ and the Conservative ‘big loaf’ was used to highlight what the Liberals saw as the increase in the cost of living that imposing tariffs would create, an argument that went back to the campaign against restrictions on wheat imports dating from the 1840s.

The question of who controlled the education system went to the heart of the divide between Nonconformists and Anglicans. The Education Act of 1902 had placed denominational schools within the state system, abolishing school boards and replacing them with largely Anglican-controlled county education authorities. Many Anglicans deserted the Conservatives in 1906 over the issue of who controlled, and who paid for, local schools.

As strict adherers to temperance, many like the Warrens and Courts were further alienated from the Conservative party by the 1904 Licensing Act which, while reducing the number of public houses in the country, compensated brewers for their losses. The links between the Conservative party and the drink trade had long been one that pushed many people to Liberalism.

The issue of compulsory vaccination was another long-standing area of contention, that echoes down to the present day.  An Act of 1853 had made vaccination against smallpox compulsory for all infants before three months, with a fine or imprisonment for parents who failed to do so. This was extended in 1867 to cover all children before they reached age 14. An Anti-Compulsory Vaccination League had also been founded in 1867, building on an earlier organisation. Their argument was that compulsory vaccination infringed personal liberty and choice and undermined parental responsibility – an early attack on the ‘nanny state’. Eventually, in 1898, a new Act introduced a conscience clause allowing parents who didn’t believe vaccination was safe to obtain a certificate of exemption. It was because exemption certificates were hard to obtain that the issue was still live and controversial in 1906. It is easy to see how the dissenter, nonconformist beliefs of families like the Warrens and Courts would lead Daisy to include this in her list of family concerns come election time.

Many other issues may have influenced the voting, of course. The conduct and outcomes of the South African War of 1899-1902 were still controversial with many, especially radical Liberals, who had opposed the war. Other social issues were also important: within two years the Asquith Government would enact a limited old age pension scheme, and other reforms would soon follow.

It is not possible to know the political stance of everyone, although it is fair to say that in a town like Crawley, an upwardly mobile area that had benefitted from the construction projects of the previous fifty of so years, issues affecting trade were upper-most in people’s minds.

The outcome of the 1906 election probably changed little for the people of Crawley. Nevertheless, the memories of Daisy Warren provide a fascinating insight into the conduct of politics in this period.

*The Daisy Warren Reminiscences are available to read at Crawley Museum. They were transcribed and edited by Pat Bracher in 1992-93, copyright Crawley Museum Society.