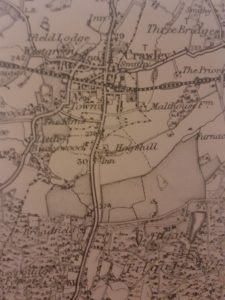 The old man started with the sentence, “When I was a child, all of this was fields.”

It was a line that had been spun many times by many people over the years as they tried to explain how much their locality had changed since their youth. Most of them would be alluding to the fact that they thought the changes weren’t for the better. That wasn’t the impression I got from the old man.

It wasn’t the first time the old man had tried to tell a passer-by what had used to be here. He stood on the corner of Wakehurst Drive and Colliers Row every day. He stood facing St. Mary’s Church and he would try and start up conversations with anyone who walked past him. Whether it was those going to the row of shops, or those heading into The Downsman for a drink.

Lots of people knew the old man by sight, and took detours to avoid having to speak to him. It was one of those things that the locals just knew about. No one was ever nasty to him, but most would try their utmost to avoid being drawn into a conversation.

I however, didn’t know about him. I had seen the man standing on the corner plenty of times before, but I had never paid him any attention. I never had a reason to be walking past him. Yet, that morning I did. It has to be said I try to avoid speaking to anyone, and for a split second I nearly kept on. But there was something about that first sentence that made me stop and listen to him.

I found myself replying, “How long ago was that then?”

And the old man told me. And as he did I stood there transfixed as he spoke and gesticulated. He pointed to places he could see in his mind’s eye that were now hidden from view by an army of bricks and concrete. He started pointing up towards the end of Wakehurst Drive to the left of the church.

“That used to be a farm down there, with fields full of different crops growing. We are stood in the middle of one of the fields. As I child I would run through those fields, much to the annoyance of the farmer I can tell you. The farmhouse building is still there, hidden away amongst all these new builds. Malthouse Farm it was called, that’s why the road is named that, and it would have been the track leading to the farmhouse.”

The old man swept his arm across to his right a bit, to point to where, hidden from view by the houses was Hawth Woods.

“They were bigger then, and marked the edge of the land belonging to Malthouse Farm. They weren’t criss-crossed with paths as they are now, just a single track through. People didn’t used to go walking in the woods then. Most people walked everywhere anyway. There wasn’t the mass use of cars there is today. None of this drive up to this row of shops behind us even though they only live across the road.”

He continued on sweeping his arm to the right,

“The other side of the woods was another farm. I never used to go near the fields of that farm though. The farmer there was a bit trigger happy with his shotgun. One of the other children I knew had forty-one pieces of buckshot picked out of the back of his legs, arms and torso for taking a shortcut through one of his fields.

Furnace Farm it was called, of course that’s where Furnace Green got its name from. As with so much of Crawley and its estates, they used the names of what was here before they built the new town. Although the town grew up in what seemed like a blink of an eye, they made it seem as if it happened organically, as it had in towns and cities that had grown up over centuries.”

The old man continued his sweep to the right.

“Tilgate Forest has been there forever, it’s actually bigger now than it used to be, it was more open the other side of where they stuck the motorway. Yet where the houses of Tilgate are now never used to be forest at all, it was all open common meadows, or so it appeared, someone probably owned it, but it wasn’t enclosed.”

He carried on and was pointing over to Broadfield.

“If what they built on for Tilgate wasn’t forest, Broadfield certainly was, there was no field at any time in my youth; it was the very edge of St. Leonards Forest. Trees covered the whole area up the hill and into Pease Pottage.”

Finally the old man turned so he had his back to the church and was looking through The Downsman.

“Over there was the old Inn. Not this modern identikit estate pub right in front of us, but the one on the other side of this Hogshill we stand upon. The Moon. There was an inn there on the road to Brighton before I was born, and I suppose there will be after I’m gone. That was the only route directly south out of Crawley back then.”

I looked at my watch and was surprised to see that twenty minutes had gone by since I’d stopped to listen to the old man. It hadn’t felt more than a few seconds. He smiled and thanked me for listening, saying hardly anyone did anymore. Everyone was in too much of a hurry nowadays. I told him that I should be thanking him for sharing his memories and knowledge with me. And I asked him if he had ever thought about writing them down; have them as a permanent record for future generations.

He laughed, saying no one would be interested. But I was, and I was sure there would be others who would be.

Lovely story. That could be my dad standing there talking about the old farms etc and how it was once all fields. He lived at Tilgate and later Broadfield.

Great story, I would have loved to have known Crawley years ago.