This October and November we are proud to be hosting the annual exhibition by Diverse Crawley and Crawley Campaign Against Racism.

Changes happen , especially around a Pandemic .
Some we can deal with, adapting or resisting, some we welcome .

DIVERSE Crawley began in Summer 2017, launched as part of Crawley’s 70th anniversary, to share and showcase the rich diversity of our town.

* Organise, host and promote events to celebrate the rich culture of our diverse community

* Encourage communities across Crawley to participate

* Offer opportunities to volunteers to participate in and develop skills

* Encourage partnership organisations to get involved

* Fundraise for the programme of activities

In 1974 Danny Martin, aged 16, was a school student in Crawley when he was diagnosed with a rare form of cancer.
At that time in the 1970s there was an increase in racist activities by the National Front in Crawley, as elsewhere.
Danny wrote a letter to the Crawley Observer, pointing out that he was being helped by nurses and hospital staff of all shades of colour and from all backgrounds.
‘I am appealing to ordinary people, making them realise that all people, regardless of of race or colour, deserve equal treatment in all things.
We are One Race, The Human Race.’
Danny’s letter was used on BBC’s ‘Thought for the Day’, where a wide audience heard his wake-up call to ‘ Join the Human Race’.
Sadly, Danny died aged 17, but his family and supporters had formed Crawley Campaign Against Racism and the group has continued to campaign for 40years. At our 40th Anniversary Hawth Show we celebrated the richness of our vibrant multicultural town, inviting ALL. 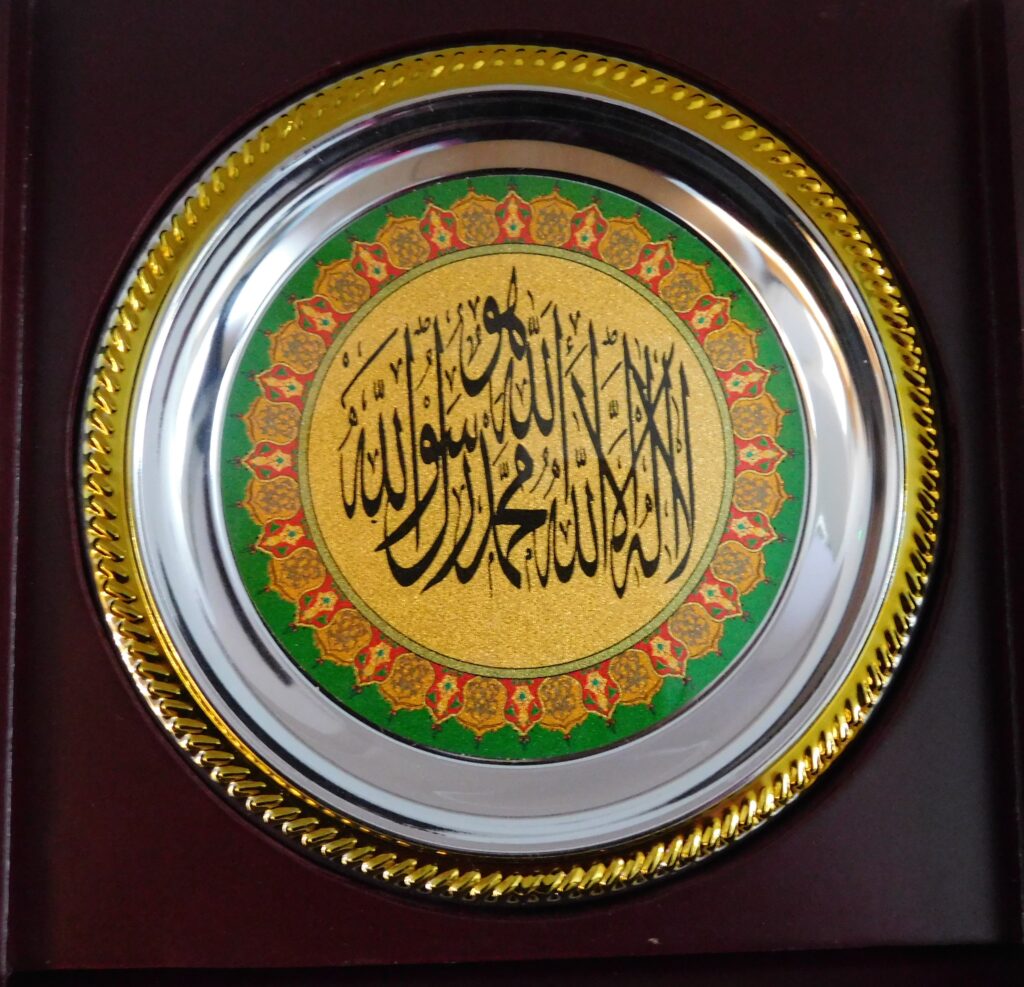 Shahadah "There is no God but Allah, and Muhammad is his messenger." This is the basic statement of the Islamic faith: anyone who cannot recite this wholeheartedly is not a Muslim. When a Muslim recites this they proclaim: • That Allah is the only God, and that Muhammad is his prophet • That they personally accept this as true • That they will obey all the commitments of Islam in their life. The Shahadah is the first of the Five Pillars of Islam 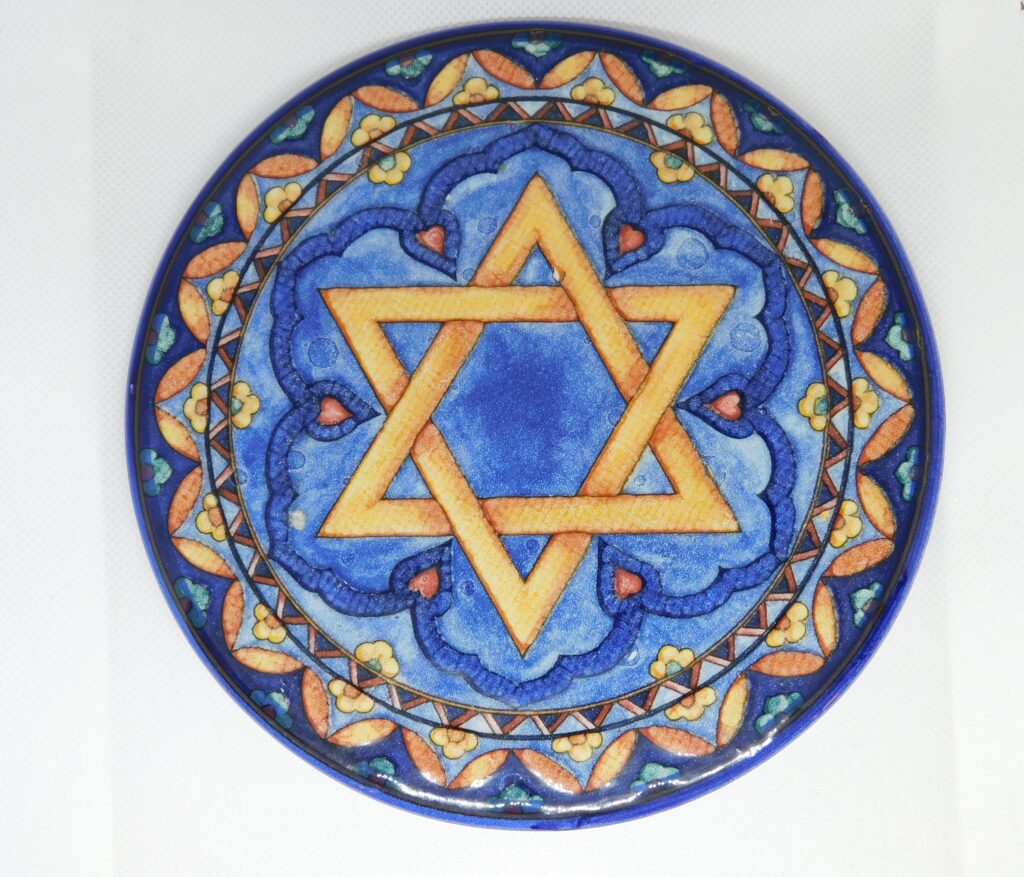 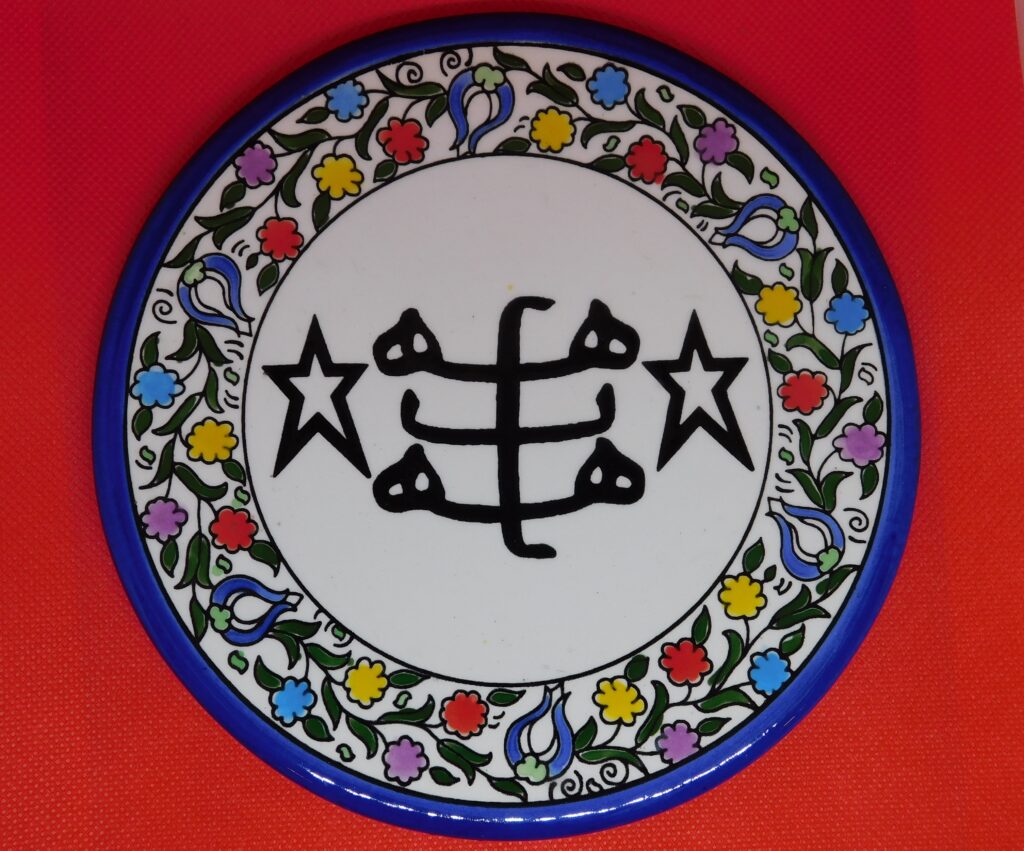 This symbol is a calligraphic rendering of the phrase "God is Most Glorious". It often appears on ornaments in Baha'i households, on jewellery or even on the gravestones of Baha'is. It is a visual reminder of God's purpose for man. 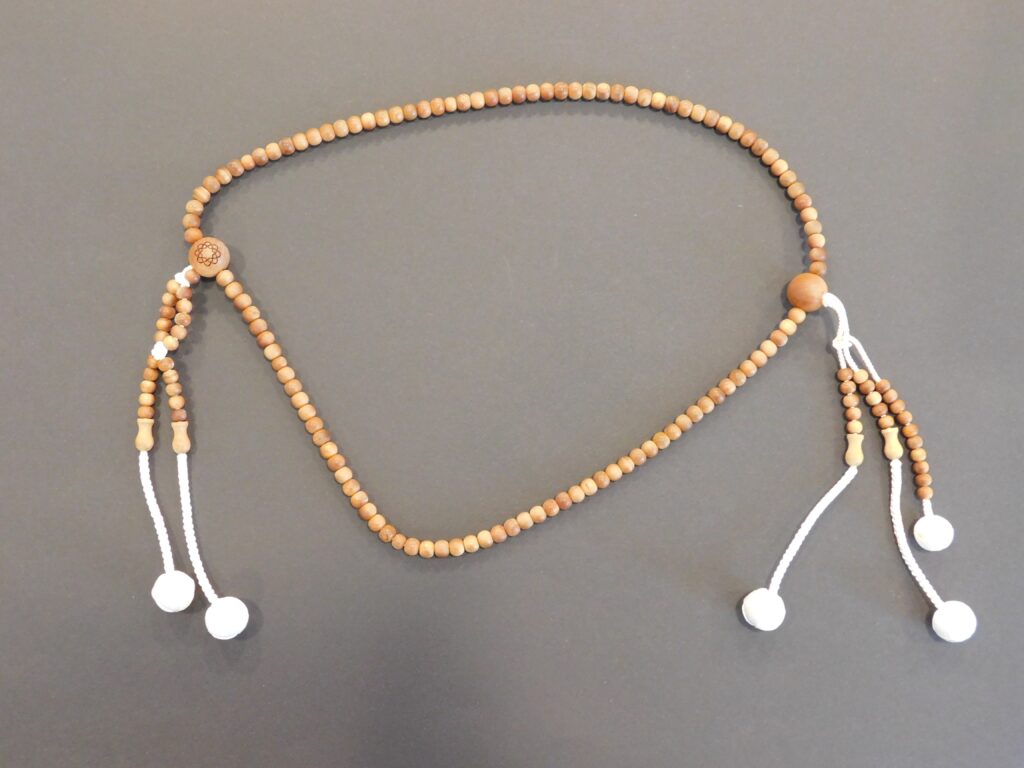 Buddhist Prayer Beads. Buddhist beads were inherited from Hindu tradition as early as 8th century BCE and are often used to count recitations of mantras such as Nam Myoho Renge Kyo. 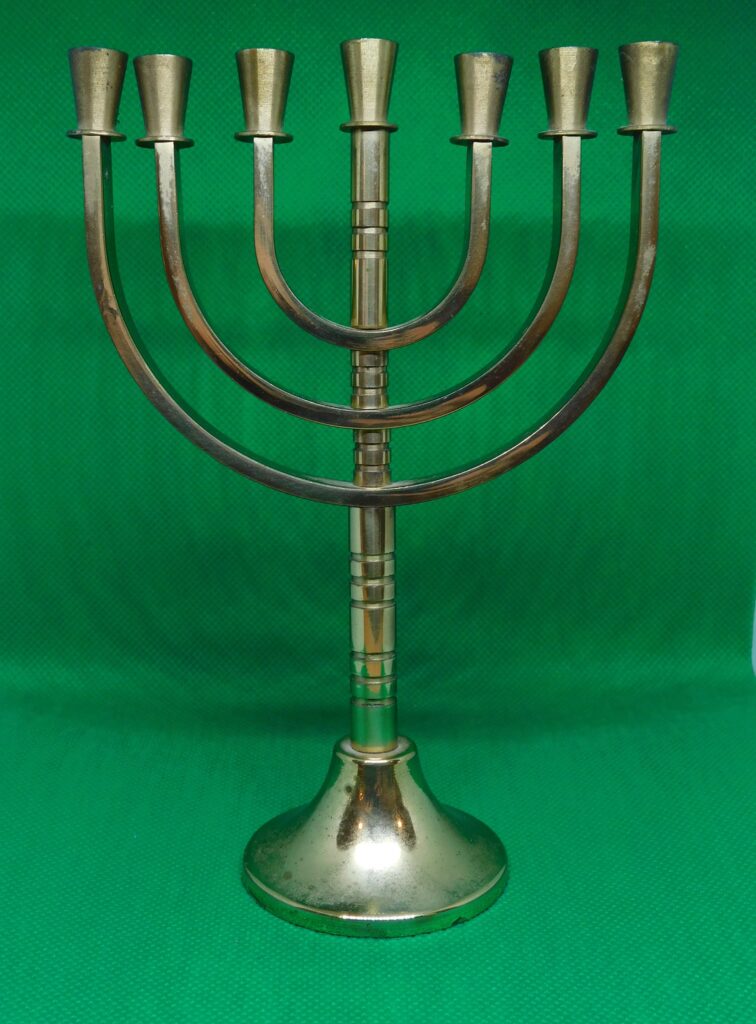 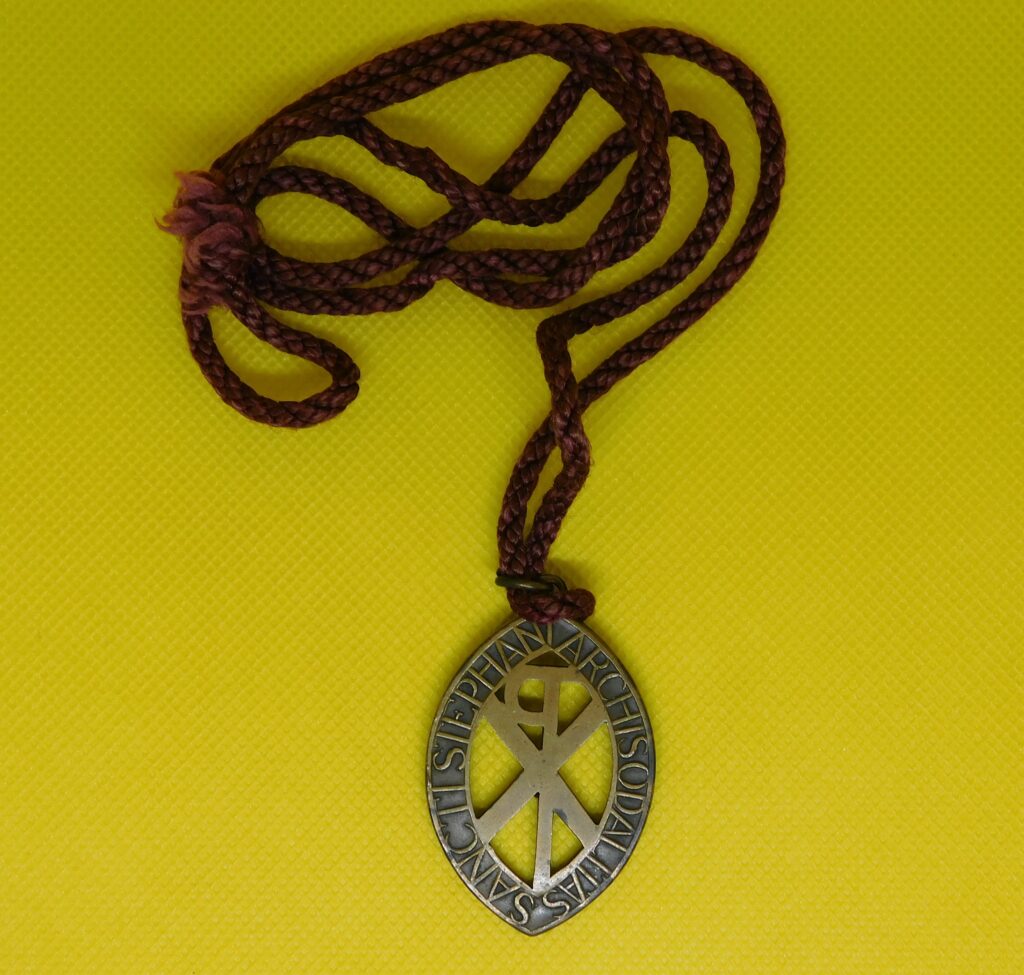 Medal worn by altar servers in Catholic Churches, who are members of the Guild of St Stephen. It contains the ancient Christian motif of the Chi Rho, which is formed by superimposing the first two capital letters - chi and rho (XP) of the Greek word ΧΡΙΣΤΟΣ (Christos) in such a way that the vertical stroke of the rho intersects the centre of the chi. 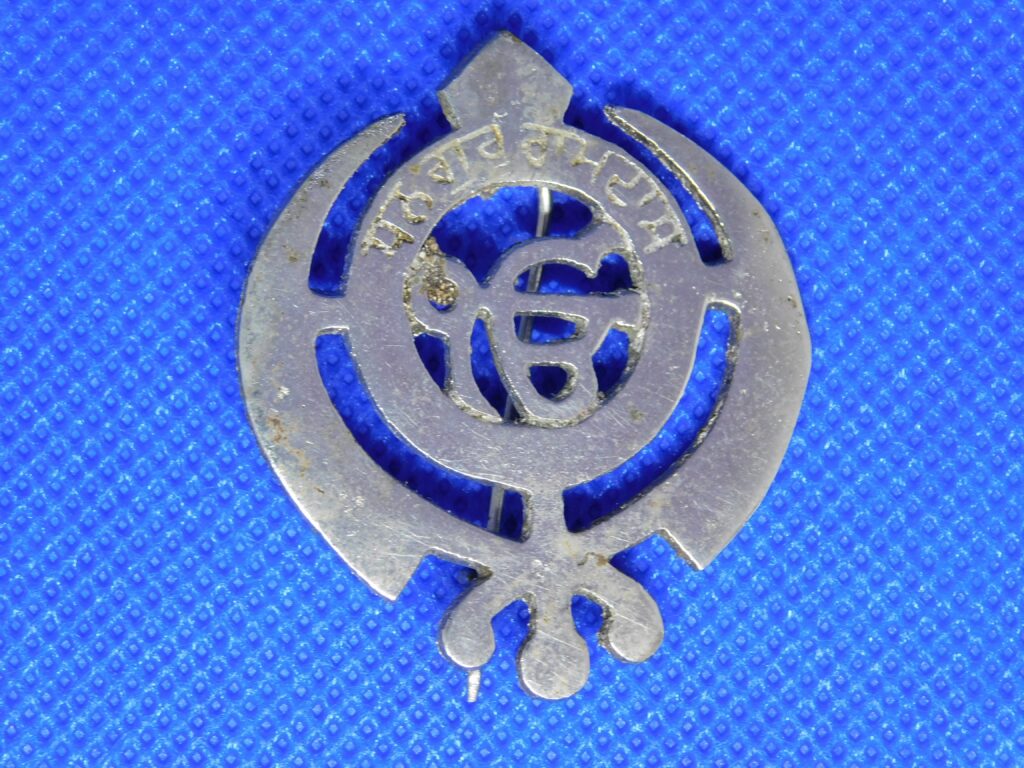 Khanda - symbol of Sikhism. There are two swords - Spirituality and Temporal. The symbol in the centre of the circle means 'only 1 God." 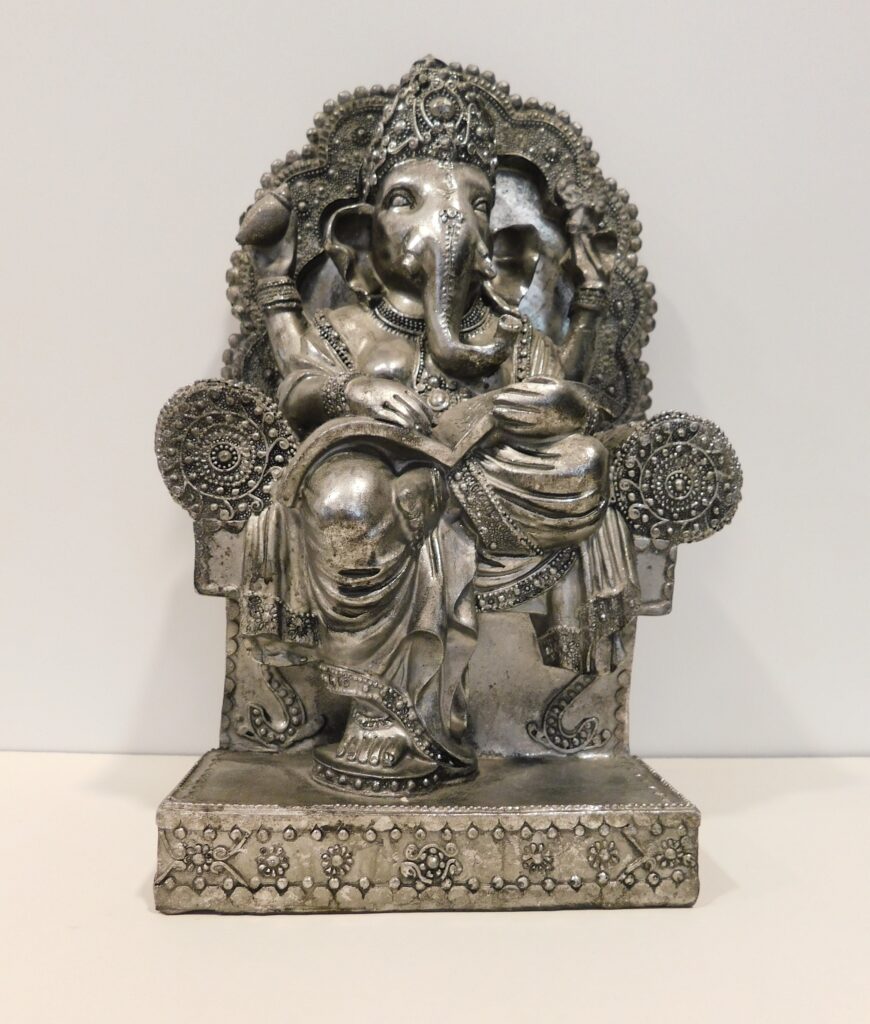 As son of Lord Shiva and mother Parvati, Lord Ganesh is worshipped at the start of all Hindu functions. His Divinity brings good luck, favourable fortune and an obstacle-free path to success. 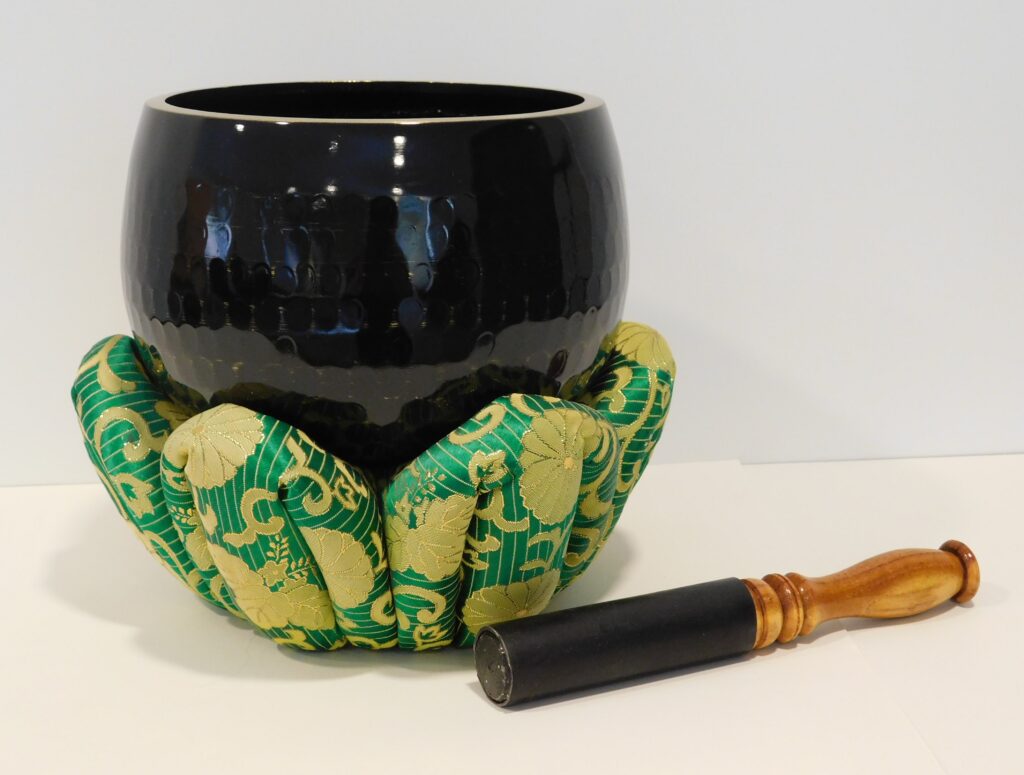 Buddhist bell. Buddhist monks from the time of Shakuamuni Buddha (c.563-483 BCE) carried wooden bowls on their travels. On their arrival at a village a monk would tap his bowl to offer to teach the dharma in exchange for food. They became the metal "wisdom" bells characteristic of Buddhism. With the striker or Vajra they symbolise the fusion of wisdom and law (Chi and Kyo) to produce the 'sound of Buddha's voice.' 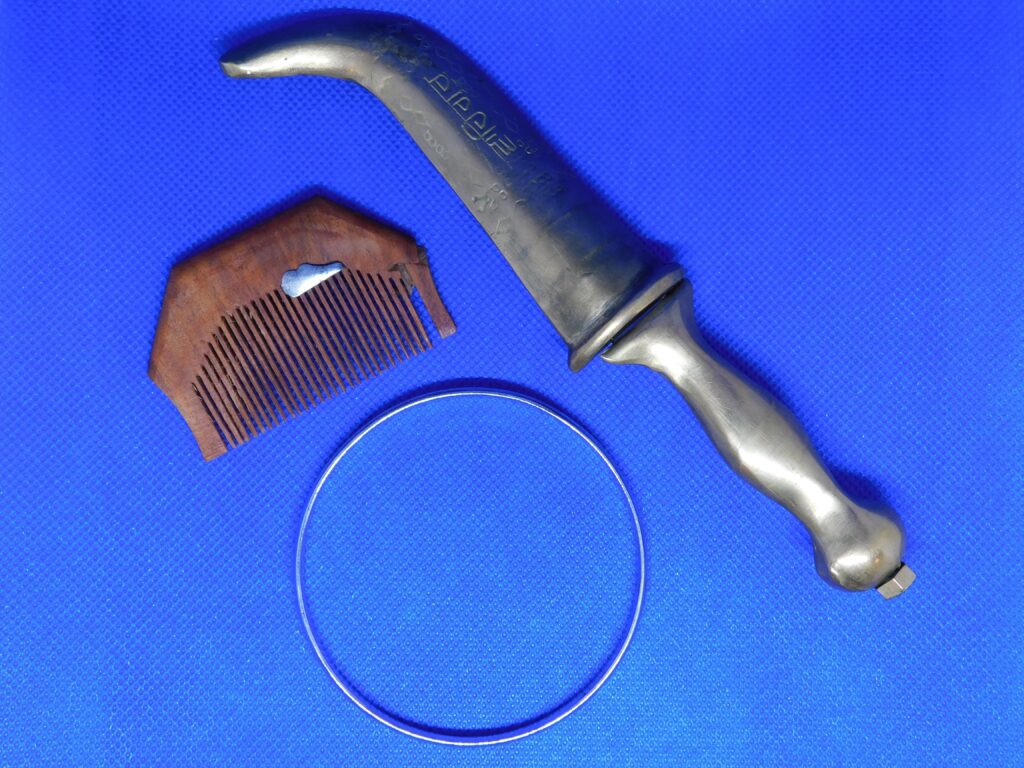 3 of the 5 'K's worn by all baptised Sikhs as commanded by Guru Gobind Singh Ji in 1699. Kanga - a wooden comb, to keep hair clean and tidy. Kirpan - a sword, to protect oneself and others from any atrocities. Kara - an iron/steel bracelet representing the everlasting God (no beginning, no end).