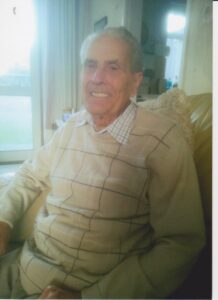 We are sorry to report that E.W.Henbery MBE, well known for his leadership in the restoration of Ifield Watermill has died aged 89.

Known as Ted, he led a team of volunteer workers from the time soon after the land incorporating the mill and its ponds was purchased by Crawley UDC in 1973. The mill was in a severe dilapidated state at the time but because of the historical importance as part of Crawley’s Industrial history, Ted realised the importance of preserving the mill and bringing it back to working order and as a museum for the public to enjoy.

A lease was acquired from the council and Ted’s team of skilled volunteers began their arduous task of restoration. By the late 1970’s the mill was deemed safe for monthly openings to the public. Until Ted retired two years ago, he was the expert, in charge of the maintenance and restoration of the mill.

Ted’s pleasant and friendly manner, combined with his expert knowledge of engineering earned him an MBE for his voluntary service to the public and in particular the Ifield Watermill restoration. Ted was a member of The Sussex Industrial archaeological Society and had a wide knowledge of Mills in the Wealden Iron Industry. 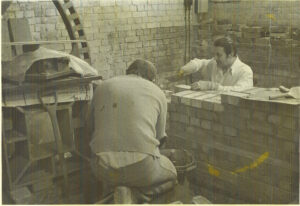 Ted working at the Mill.

Ted realised the importance of keeping records of the restoration over 40 years. He collected photos and postcards and historical documents concerning the mill and invited local historians to record the history of the Iron and Flour Mills that existed at the present site.

The Mill Guide, which can be purchased from Crawley Museum, Ifield Watermill and online describes the workings of the mill, the artefacts, the history of past mills which existed on the site, and items local history. Ted Henbery and Pat Brasher are the main authors of this informative document. Ifield Watermill is open to the public on selected Sundays from April to September.

Due to Covid19 restrictions, Ted’s funeral will be limited in numbers, so we are running the wheel in his honour on Friday 8th January 2021 at 2:45pm. Please join us if safe to do so.