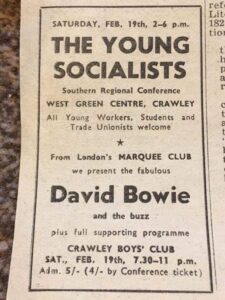 We love this advert!
We found it in a press cutting from February 1966. As it was just a cutting we unfortunately don’t know which newspaper it was from.

According to some of our followers on social media, the Young Socialists used to run a disco at West Green Community Centre on Wednesday evenings.

We don’t know anything else about the conference or the gig. Do you?

Interested to see that David Bowie played in Crawley. My friends and I often went to Boys Club dances . generally held for everyone but I can’t remember any good bands playing there. However Lulu came to an Ifield Grammar School dance when I was there (I left aged 16 in 1965). Also The Who played at the Civic Hall and I managed to get Roger Daltrey’s autograph – pity I haven’t kept it!