My memories of growing up on a private estate, Crabbet Park, in the village of Worth.

As children, my brother, sister and I, had the most wonderful life. Freedom to play, in woodland, streams, forest and fields of the lands owned by Lady Wentworth.

Our lives at Crabbet Park were regulated by the needs of the Arab horses and the farming calendar, and we were most fortunate to be included in these activities.

My father, Burges Stace was head stallion man up at Caxtons Stables, and we lived in a pair of cottages built in the Sussex style in 1938, later demolished for the M23 motorway.

My first memories of the horses are being held up to stroke Oran, a quiet stallion and breathe in the lovely, nutty smell of a clean horse! My father took me to work with him most days before I started school, and then in the school holidays.

The quiet of the barn, where the young colts spent their first year, was a wonderful playground, this stood next to Caxtons Farm House, a very old house, lived in by a lovely lady, Peggy Leppard and her husband, Harry. Peggy was a firm favourite of mine and my sisters, as she would call for us on her way home from the Big House where she was Lady Wentworth`s housekeeper, over to the delights of Caxtons House, sweets in the old syrup tin, mystery doors and huge fireplaces, we loved to stay there with her, and `help` her with the `house` sewing.

My father, Burges Stace, was a stallion man for Lady Wentworth, and worked from 15 years of age to when Cecil Covey gave up the Arab Horses Stud, which was in 1973, when my dad was 63, a total of 48 years man and boy.

In the afternoons on the estate, the men carried out maintenance work along side the farm workers, but my dad also had other tasks. To me the most enjoyable, was mole catching. Whole afternoons spent in my dad’s company, wandering round the fields of Crabbet and Frogshole, rain or shine. Spotting which traps had been sprung,I would feel so very sorry for the moles, who were after all only doing what moles do. 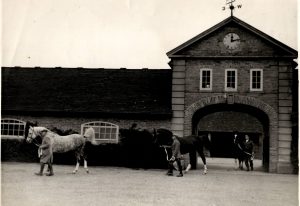 In the autumn we spent many hours hedging and ditching, laying new hedges, replacing fences, this was an added bonus as the men on the estate always received a wagon load of wood for their fires, and fence rails to me and my sister were so easily stackable when sawn.

Dad’s other duties were chaff cutting, a horrible, dusty job, which contributes to `farmers lung’ caused by heavy dust particles., which eventually in his retirement caused his death. Another chore down at the `bottom` feed house, was the boiling of the linseed, and then dad had to carry two heavy steaming buckets on a neck yoke, up Caxtons Hill to the stallion stables, as a child, I disliked this so much, I thought that my dear dad was used without consideration when I knew there were tractors available.

Harvesting at Crabbet, Wakemans Green and Frogshole took up a great deal of the men’s working hours, working until dusk, arriving home filthy dirty, and no running hot water! Our hot water was heated in a copper outside, my mother was a hero, backwards and forwards with the buckets to wash and bathe in. In those days , all the men took to the harvest fields were bottles of cold tea to keep up their fluids.

Lady Wentworth was very much against cutting down any trees, so any emergency limbing or cutting had to be done when she was not around, my dad and Peter Harwood did most of the estates tree work, and subsequent bonfires, another children’s joy, smelly hair and clothes but lots of fun.

All the maintenance work on the buildings at Crabbet were carried out by Mannings & Co from Crawley Down, including the interiors of the cottages, they also creosoted the fences around the stables, still an aroma to bring back memories of hot sunny days. 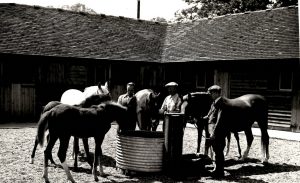 On afternoons in spring when the mares and foals were being brought in, my sister, Daphne and I would like to go down the hill to The Coronation Stables yard to watch our Uncle Rod and the other men, round up the foals and sort them into the right stables, our parents were told that it was really too dangerous for us, so we had to forego the excitement of watching the men shout and the whole place like a wild west show, and console ourselves with feeding our favourite stallions with as much grass as we could carry in our outstretched skirts.

Village life centred around the church, and Sunday School. We attended both, my brother and I achieving 100% attendance most years. We had wonderful Christmas parties, sports days and an outing to the seaside every year. The Worth Horticultural Society had their annual show at the Worth School, we always went along in the hope that our dad would win the pig, the nearest we got to this, was our next door neighbour won a goose, named by us as Gracie, and she lived for 15years. She was a wonderful guard goose, in her dislike of men and boys she would honk, hiss and flap her wings, much to our delight.

Crabbet Park and the way of life changed dramatically after Lady Wentworth died in 1957. Cecil Covey inherited Caxtons Stables and Frogshole Farm, the stallions stayed at Caxtons, and the brood mares went down to newly built stables at Frogshole Farm where Cecil Covey lived. The estate at Crabbet Park changed forever with a wood merchant buying and taking down all the commercially viable trees. The land changed hands many times, before the intervention of the M23 motorway.

A Racing Yard was run from the Coronation Stables and the threshing barn was renovated into a dwelling house. After this it was a nationally acclaimed riding school, it changed hands again and is still to this day a riding school.

When the M23 motorway was planned, a parcel of Caxtons land was required and my family’s home was demolished to make way for the motorway. Then Cecil Covey decided to give up his Arab Horses altogether, so new homes were built for my parents and their neighbours further along the Turners Hill Road.

Frogshole Farm was also wanted by the Crawley Town planners, so that was also sold and became Maidenbower a new neighbourhood of Crawley. 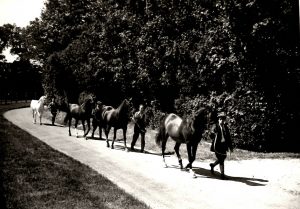 And more memories from Stella Berrisford

I remember yourself and Daphne very well,
My name is Adrian and I was an apprentice jockey for Mr Francis Muggeridge who was the racehorse trainer there at the time I started with him in the early 60s, I can remember digging cars out of the snow due to the severe winter we had
Names that you may remember were Nobber Pat Mick Ron and Rodney who were also there at the same time as myself until sadly the stables were sold to an equitation centre because the reason I believe is that the M23 would have cut straight through the gallops we used to exercise the horses.
Such fond memories of a beautiful place.

Nobber was my dad! We’ve been with some of his old friends this morning talking about crabbet park and I googled it on the off chance I might find a picture, did not expect to see his name pop up! If you see this id love to get in touch!

Leart to ride here in the 1970s. Wonderful place.
Used to help muck out, clean tack for people, anything to just be around the horses. In later years my daughter competed here in the X country events. Such happy, golden, unforgettable memories.