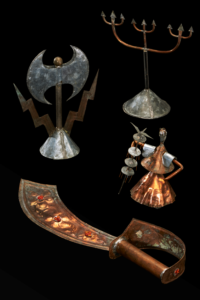 Have you been in to see our loan from the Horniman Museum yet?

Until 15th December, upstairs in our Link Gallery we have a display case with four Candomblé ferramenta.

“Ferramenta” or ‘tools’ are used in the religion of Candomblé. Each ferramenta represents a particular Orisha – a spirit or deity from the large Candomblé pantheon. Candomblé developed from the religions of enslaved African people from the 17th to late 19th century, in the Bahia region of Brazil.

West African, particularly Yoruba, religious understandings merged with other African and Indigenous American beliefs as well as Catholicism to produce a distinctive Afro-Brazilian religion which, through music and dance celebrates life and its continuance.

These four ferramenta were collected in 1998 as part of fieldwork undertaken in Brazil by Keith Nicklin, former Keeper of Ethnography at the Horniman Museum and Gardens.