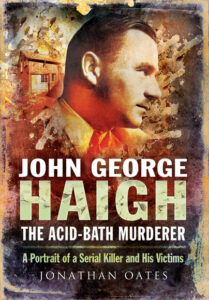 In February 1948 a man and woman were lured to a basement property in Leopold Road, Crawley, and there were murdered and their bodies dissolved in an oil drum filled with acid. The couple were Dr. Archibald Henderson and his wife Rosalie. The murderer was John George Haigh, known to posterity as the Acid Bath Murderer. The Hendersons were just two of the six people killed by Haigh between 1944 and 1949. Haigh claimed to be a vampire, but his crimes were actually motivated by money or the lack of it.
In this meticulous account of Haigh’s life and crimes, Jonathan Oates seeks to correct the myths surrounding the case and to give due attention to the lives of his victims. He looks in detail at the police investigation, Haigh’s trial and execution, and gives thorough consideration to the range of theories about his character and motivations.
Haigh came from a loving but very conservative and austere Plymouth Brethren background, which he attempted to partly blame for his actions. Although not anti-social, he was nevertheless described as distant, with a sense of superiority that came from the certainties of his parent’s beliefs. From childhood, he was neat and clean in his manner; ingratiating with ‘a strain of narcissism’, seeking ‘a lifestyle he felt he was entitled to.’ He cultivated an ‘aura of disreputable glamour’, sporting a moustache that he believed made him look like the film star Ronald Colman. His short marriage and total disregard for a baby daughter, showed an ‘emotionally shallow and callous personality.’
Haigh spent much of the war years in and out of prison, with convictions for fraud, theft and receiving stolen goods. He seems to have eluded military service by either being locked up or just not being where he was supposed to be!
In 1944, Donald McSwan, was also attempting to avoid military service when Haigh murdered him and dissolved his body, before defrauding and killing McSwan’s parents. Then, in 1948, Haigh killed the Hendersons at his ‘factory’ in Giles Yard, Leopold Road, Crawley. Again, the motive appears to have been financial as he used forged documents to empty their bank accounts, as well as selling their jewellery, car and property. Finally, Olive Durand-Deacon was lured to Crawley and murdered in 1949; it was the undissolved remains of Mrs Durand-Deacon that finally set the police on Haigh’s trail.
All these events, along with the trial and execution, are covered at length in the book. Crawley takes centre stage in many sections of the account, and it would still be possible to follow Haigh’s career around the town, if you were so inclined!
Oates is at pains to present as balanced a view of Haigh as possible. Was he mad or simply very bad? Did his claims that he drank his victims blood seem plausible? The evidence is weighed with great care here, but ultimately it is still up to the reader to come to conclusions as to the motivations for these grizzly crimes.

You can buy this book in our online shop