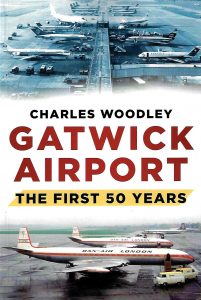 The growth of air travel has been one of the dominant social, economic and technological features of the post-war world. The role of airports has been an area of debate, especially with climate change such an important feature of life today. The time is right for an assessment of the role of air travel and its impact on our lives, as we enter the third decade of the century,

Charles Woodley has written a very detailed and well-illustrated account of Gatwick Airport, covering the period up to the early 1980s. He is clearly an aircraft enthusiast, with a fascination for daily aircraft arrivals, the airlines serving the airport, and the types of aeroplane that have used its facilities over the years. These are all detailed in thorough listings to be found in the text and appendices, which should satisfy the appetite of most aerophiles!

Woodley deals with the ups and downs of airlines such as Laker Airways, British Caledonian and Dan-Air. He deals with the politics, internal and national, of Gatwick, charting its rise as London’s second airport.

At least since the late 1950s, Crawley has had a symbiotic relationship with the airport just to the north of the town. Gatwick has provided a crucial source of employment to many people living here, and the fortunes of the airport have been reflected in the economic structure of the town. It is a little disappointing that nothing is said in the book about this relationship between the airport and it’s surrounding human geography. The period covered avoids consideration of the social and environmental affects of any expansion to the airport, which must surely in the age of coronavirus now be way down any agenda.

The first half of the book is perhaps the most interesting to the general reader, especially the story of the opening ceremony in 1936. Guests included the flyers Amy Johnson and her husband Jim Mollison, and Sir Malcolm Campbell (who developed and tested his Blue Bird water speed record boat on Tilgate Lake). There were parachute drops, and an RAF flying display, and a ‘… special arrivals competition for visiting pilots saw 100 light aircraft land within a thirty-minute period …’ with the winner getting a Cup and £15! The chapter on the role of Gatwick during 1939-45 is also of particular local interest.